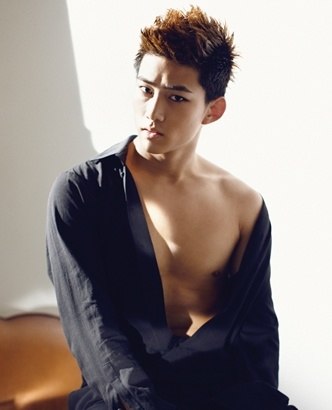 Whatever you may say about 2PM (weak vocals, strange choreography, beefcake overload) I don’t think you could ever accuse him of low self-confidence. He almost immediately became the proxy leader in Jay’s sudden absence and according to a recent tweet to Miss A’s Jia, only responds to “Sexy” thankyouverymuch:

Twitter buddies Taecyeon and friend/producer and songwriter, Ian Choe, had the typical truncated Twitter discussion about seeing the new X-Men movie that has somehow mutated (haha) into Taec looking for a blind date:

Pretty typical for a Twitter convo, but add Kpop and a brief, muddled mention of the opposite sex, and it’s headline news. Am I the only person who volunteer to be the girl on that blind date? Ignoring the fact I’m not really an X-Men fan, Taec seems the type to mentally check out whenever Mystique is on screen.