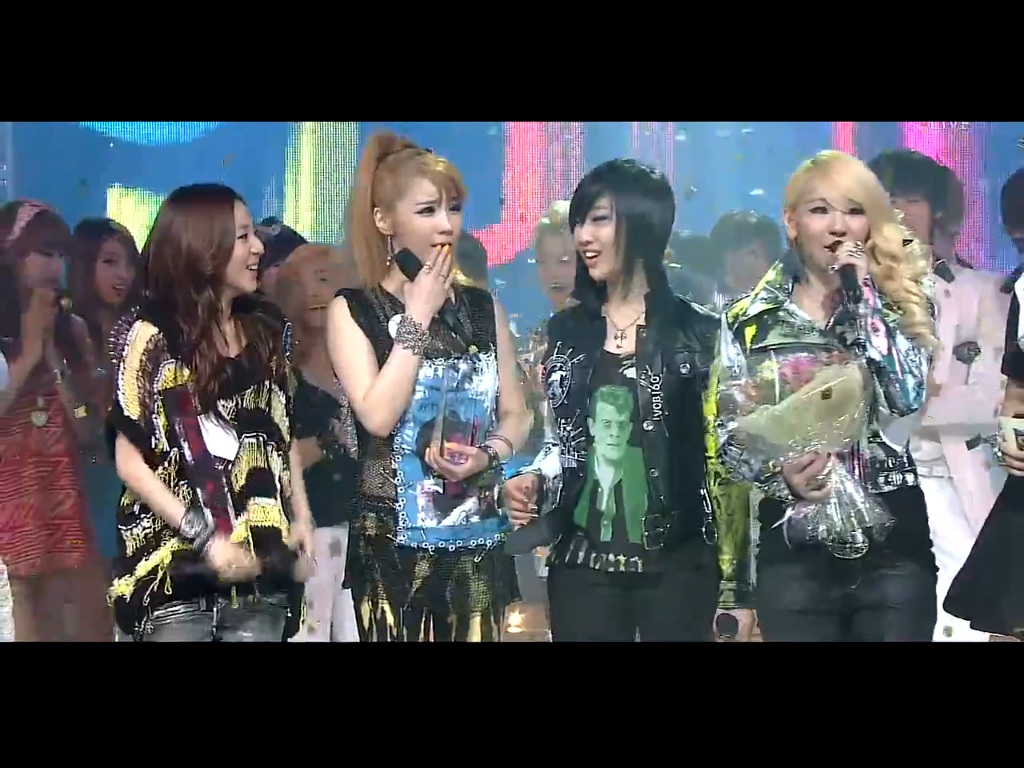 Happy Memorial Day Weekend to all, and what a better way to celebrate that watching our favorite k-pop stars sing and dance for us like the little robots they are.

2NE1 dominated the broadcast, and gosh, it’s great ‘Lonely’ is doing so well, because they weren’t even going to promote it (uh huh). I like the song, it’s just a shame this all had to collide with F.T. Island’s comeback.

The girls look good, with a retro-eighties “Rent” (Minzy busting out with ‘Out Tonight’! In my dreams) look to accompany their new single. Dara’s hair is long again, curses. I liked the short, spunky hairstyles they gave her in the MV – it made her look eerily like a certain Dragon of the G that we know.

CL has this Marilyn Monroe thing going on with her hair, Minzy looks real grown-up and Bom even gets to sing her single , ‘Don’t Cry.’ That’s it, they win, let’s all go home.

No, not really. But it was interesting to see the song live – CL’s blonde hair and makeup really bothered me and I don’t know why – on the other hand I’m sending a pic of Minzy’s haircut to my hairdresser.

But yes indeed there were other performers, performers even worth watching : F.T. Island for example.

I know we have a huge F.T. Island fan (just kidding!) on the writing roster so I will type my opinions carefully and diligently. Thankfully, probably owing to the fact that they are indeed, a real band, that performs frequently without intense direction from a choreographer or mentor they performed just fine. They didn’t beat 2NE1 on the show, but I think they beat them in the Best Sad/Pissed Off Performance Face contest.

I want to like this new generation of Jewelry. They are reasonably talented, and look, they have their very own CL!; but I think the songs are killing them here. I just feel they give me literally nothing to grab on to. That’s probably the issue with most K-pop acts- people can be harsh about the talent of these artists, but in many cases, they aren’t given much to work with.

I don’t know what it is with me and f(x). They always have singles that are like an audial M.C. Escher painting for my ears, but the more I watch them perform it, it slowly turns into genius- you don’t know what you just watched but it works, like a Tim Burton film.

A sane explanation would probably be that f(x) has always had interestingly intricate dance moves. These are probably the simplest I’ve seen them do, but it’s still in another class above what most girl groups are given.

Right, so there were some boy groups performing, I believe? Perhaps we should talk about some of them.

I suppose I can respect anyone willing to just drop any semblance of artistry and go straight for the fan girls with ‘Boyfriend.’ I still find it crazy (and crazy hilarious) that the boy groups have fan names, colors, chants, even a freaking seating section before they’ve even had their debut stage. As for the performance itself: shojo manga overdose.

BEAST are getting positive feedback for their new album, and one thing I can respect about these guys as that at least they appear to mature and evolve with each concept. Think about the matching white boybanded-ness of ‘Bad Girl’ from the very beginning – these guys are practically blue collar workers now in comparison. They’re all grown-up! Also, the song is nice as well. Another run-over body from the 2NE1 juggernaut.

Thing is, I don’t believe that YG plans on promoting that song for long – at least until the next one is released. Overall a pleasant show, which also featured performances from Jang Woo Hyuk, Heo Young Saeng,  Jay Park, December, 5Dolls (Co-Ed is dead isn’t it?), NS YoonJi and X-5.