Hopefully, I can get back to a regular schedule this week (meaning a 5 Things on Wednesday or Thursday), but with what’s been on the ‘net recently… I don’t know.  It’s back to watching Kdramas for me as a slew my fave kind of Kdramas (what the guru calls ‘trendy’ dramas)  hit the airwaves.  The Best kind of Love, Hyori joins the Twitterverse, City Hunter sightings, Kim So-hyun gets tweeting, and the Gangs of Seoul tickle your funny bone.  These are the 5 Things that happened in Kpop last week that I think were a little bit more special than the rest.

The Best Kind of Love 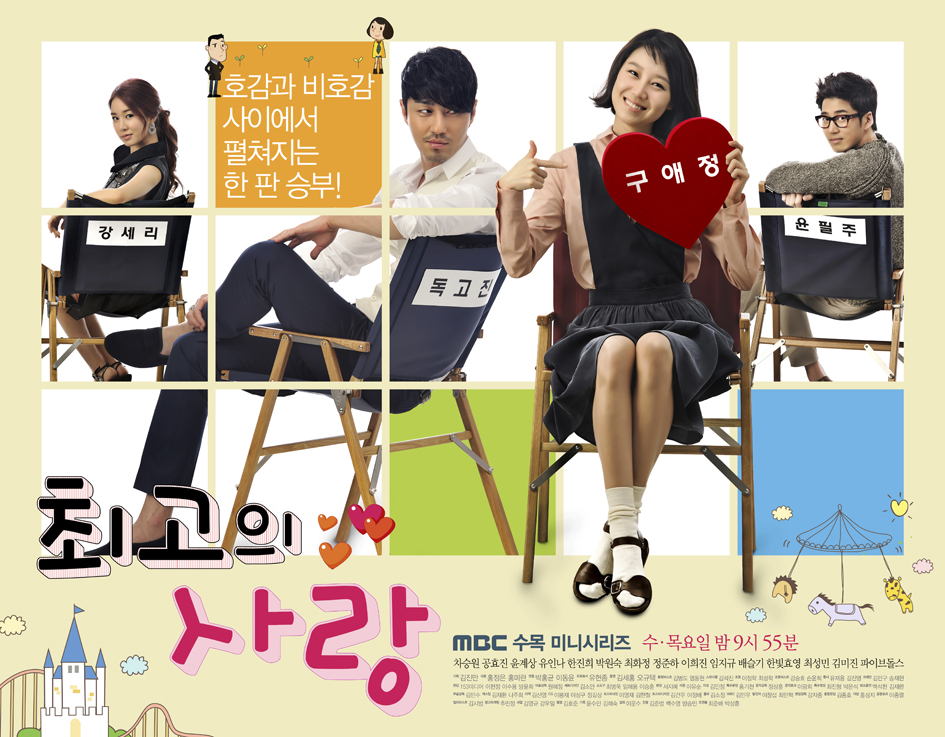 Hong Sisters how do I love thee, let me count the ways.  The Hong Sisters are my fave Kdrama writers, their stories always have the right amount of cuteness, heartache, and plot twists to keep me entertained.  I was interested in seeing how Cha Seung-won, who I have mostly seen in his ‘badass’ roles (Athena, 71: Into the Fire), would fare in the Hong Sisters’ latest rom-com the Best Love (aka The Greatest Love), that takes its fans behind the scenes of K-varieties and the life of Korean stars.

The drama stars Gong Hyo-jin as Gu Ae-jung, a struggling ex-idol whose fame plummeted from her girl group days after a bunch of false rumors and scandals brought her down and Cha Seung-won as Dok Go-jin, an actor at the top of his game whose real personality is not as kind and nice as he appears to the public.  Their lives get crossed through various mishaps and in the end Ae-jung helps Go-jin find his heart.  There are solid second leads and supporting cast: in Yoo In-na as Kang Se-ri, the now popular maknae of the girl group that Ae-jung was in and MC of a variety show called Couple Making who isn’t as sweet as she seems; Yoon Kye-sang as Yoon Pil-joo ,an Asian traditional medicine doctor who gets mixed up with the celebrities when he joins Couple Making; Lee Hee-jin as another of the former girl group members Jenny, who is Ae-jung‘s best friend; Jung Jun-ha as Ae-jung’s brother and manager Ae-hwan; and Lim Ji-gyoo as Go-jin‘s abused and unappreciated manager Kim Jae-suk.

I’ve watched all four episodes that have come out so far (already have Cha-Seung-won yelling about his ‘panties’ in this week’s episodes down for next week’s 5 Things- omg) and so far have loved every minute of it.  I’m sure the production of the show is getting some great insight into the lives of idols/ex-idols from Yoon Kye-sang who used to be in g.o.d. (and who funnily enough was blamed for the groups eventual disbandment when he left to pursue acting- much like the story of Ae-jung), Lee Hee-jin a former member of Baby V.O.X, and Bae Seul-ki, who plays Han Mi-na the fourth and last member of the fictional girl group Kukbo Sonyeo, a former The Red group member and solo singer.

I had mentioned I was previously in a Kdrama rut and was taken to task by one of our readers for not watching 49 Days which I didn’t watch because I though it would be too sad (Kdramas that make me cry too much are a no-no).  I did recently catch an episode on our local Korean station and my interest has been piqued.  I have no idea how I’m going to fit in watching 49 Days now though while watching all the other new Kdramas that came out (Lie to Me, the Jdorama Muscle Girl ft. Lee Hong-ki, etc.).  Guess I’m in the same boat as fellow SBer Madeline. 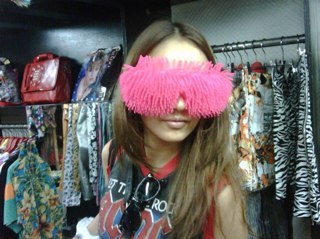 Lee Hyori joined Twitter on April 30 as @frog799, but it wasn’t until May 2nd that news of Hyori’s Twitter account started spreading like wildfire when the Korean news media picked up on a tweetversation between Hyori and ZE:A’s Kwanghee.  Hyori has been relatively active on her account with her tweets still making news and her posting pics of herself with friends and of her cute dog.  As a fan it’s great to have her on Twitter which gives us a chance to see what’s up with Hyori, who had been laying low for a while since her h-logic problems.  That didn’t make me just sound like a stalker, did it?  Anyways, I’m looking forward to some great Hyori-isms to come. 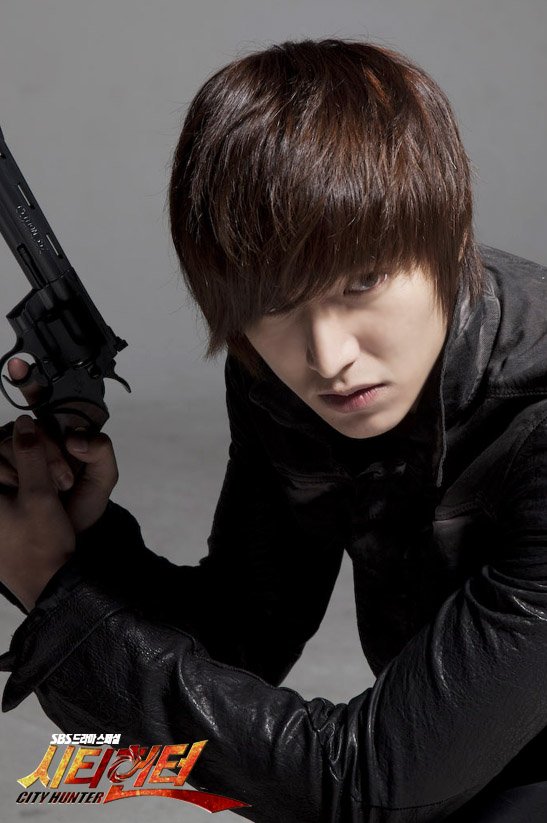 There’s been a lot of stories and pics being released about Lee Min-ho‘s upcoming Kdrama City Hunter which is based on the popular manga of the same name by mangaka Tsukasa Hojo.  I’ve been interested and getting excited because I’m a fan, but I gotta say that when these pics of the newly muscled out Min-ho throwing it down and dirty were released- I became just a tad bit more interested. 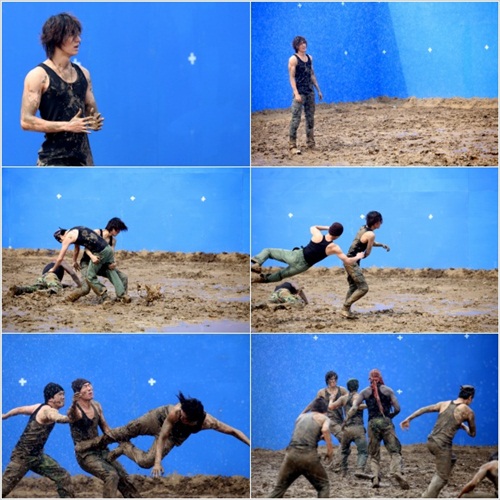 Whoah, Min-ho is looking good.  For a while Min-ho had been keeping his flower boy look, but it looks like he grew up a bit for this role.  Park Min-young co-stars with Min-ho in this drama which is scheduled for 20 episodes and will be a Wednesday-Thursday drama for SBS set to debut on May 25th (oh no, not another one… when will I sleep?). 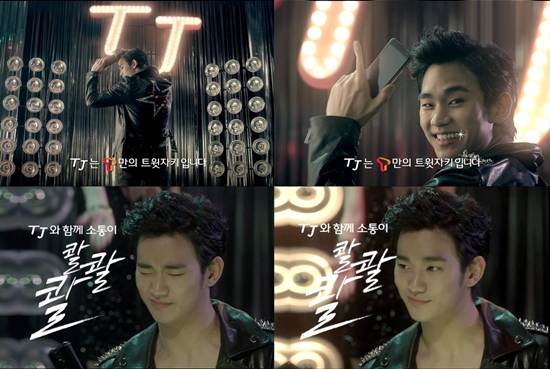 Dream High cutie Kim Soo-hyun became a “Tweet Jockey” for SK telecom in their new ad campaigns.  Soo-hyun has tickled fans with his witty tweets like “Song 3-dong is where 3G is the fastest.” Song 3-dong is a Seoul neighborhood and if you were to pronounce the 3 it would be Song Sam-dong… cute, you get it right?

Starting from May 3rd, fans will be able to continue to see tweets from Soo-hyun every Tuesday for about an hour starting from 11:00am KST at SK telecom’s twitter @SKtelecom.  Up next for this talented young actor is the movie The Professionals (fka The Thieves) which is about a gang of professional thieves planning  a huge heist a là The Italian Job which is scheduled to be released at the end of this year.  Soo-hyun plays the youngest thief of the bunch amongst a bunch of sunbaes.

The Gangs of Seoul… was this supposed to be scary? 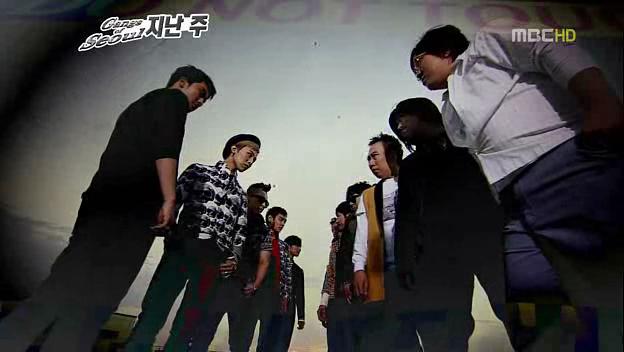 Big Bang appeared as guests on special episodes of Infinity Challenge with a storyline called “Gangs of Seoul” (I’m guessing they’re modeling after the movie Gangs of New York). The Infinity Challenge members were waiting for atop the MBC building and this is what Jung Hyung-don to pass the time… he busted a move.

This is what the groups did to intimidate each other.  And let’s just say that G-Dragon shouldn’t bet anything important on a game of gawi-bawi-bo!

To even things out one member of Infinity Challenge needed to join Big Bang because it was 7 vs. 5 and I guess Jung Hyung-don thought he’d be a good fit. 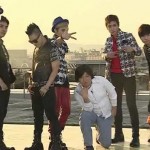 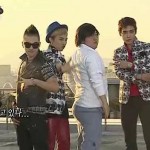 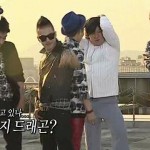 In the end though Jung Jun-ha ended up going over to the Big Bang side and somehow they ended up playing this game to see who would be their Boss, I guess by seeing who was toughest?

It was pretty hilarious and yesterday’s episode continued the hilarity as the ahjusshi gangsters took on the young slick crew of thugs, lol.