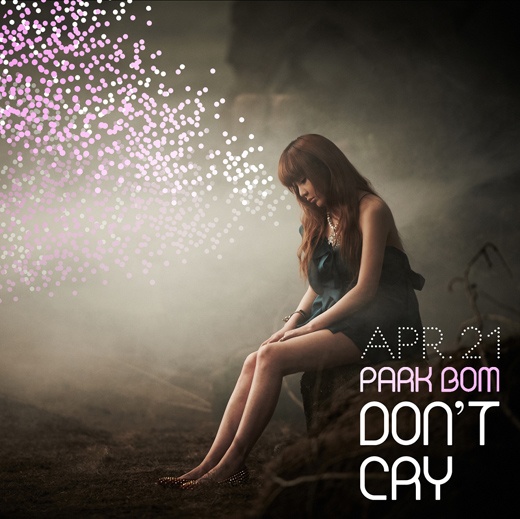 YG Entertainment continues with their try for domination of 2011 with the release of Park Bom‘s latest solo digital single “Don’t Cry.”  It’s a more upbeat song than her other single “You and I,” but it is another kind of sad love song.  I like the song though I don’t think it’ll be my song of choice for random bouts of Kpop-burst-into-songitis that “You and I” was for me (don’t tell me you never just burst into your fave song with your hairbrush… *crickets* liars).  The MV is nice and pretty much self explanatory (although if you’d like further details of the MV’s storyline you can check this out), but  it instantly reminded me of the “It Hurts” MV (which I loved so not so bad) and Taeyang’s “I’ll Be There”  (I think it’s the same staircase) and Bom’s MV for “You and I.”  Trying to follow a previous successful formula isn’t wrong, but you don’t want to be mired in monotony either.  Check out the MV for yourself here.

You would think having an upbeat sad love song would be quite at odds with the message behind the song itself, but when looking up the lyrics I could see how everything kind of works. The song is about a love that was lost whether due to the strains of everyday life as the lyrics suggest  (or the loss of the person as the MV suggests) with the hope that maybe in the next life it will work out?  I still like it, not wowed though.  One question- why are all Bom’s solos sad love songs?  She’s gonna be like the female 2AM.  I guess it could be the somewhat soulful quality of her voice which influences the songs they write for her, but geez YGE let the girl be happy sometimes.