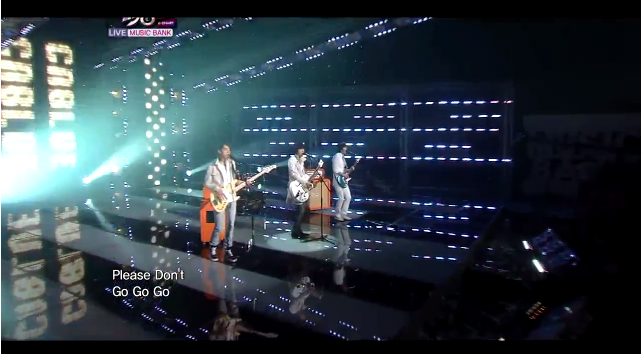 It’s the 599th episode of Music Bank this week, and even though the shows preceding a major anniversary are oftentimes anticlimactic, this week’s show was so action-packed that I just had to recap everything. New boy group Block B made their debut this week, while Dal Shabet and NS Yoonji had their comeback performances today. Now, without further ado:

Kim Greem: “Nobody But You” – Her outfit is a bit difficult to take seriously, but her voice isn’t. Nothing incredibly special, but she’s pleasant to listen to.

Block B: “Freeze!” – This new boyband has received boatloads of hype prior to their debut. I’m usually pretty cynical about rookie groups because I’m just cold and mean like that, but Block B has a lot of potential. The vocal performance was a little rough, but it’s their debut performance so I’ll let that go. Beyond the roughness is a ton of energy and some really nice voices, and I’m really looking forward to hearing these voices reach their full performance when they become more polished. “Freeze” isn’t all too impressive as a song, but I love the transition into the chorus.

Seo In-gook: “Broken” – You’re a nice guy and all, but cool it with the purple lace. Come on now.

Handsome People: “Crazy” – Ridiculous band name, but these guys are so quirky and cool that I can’t help but love them.

Rania: “Dr. Feel Good” – They’re back with reamped outfits and the elimination of a “sexy” dance break following criticism from the Powers That Be. Awesome as always, but would it really kill them to sing the chorus and the hook live? They certainly have the skills to do it, and it would make them look so much more legit.

Brave Girls: “Do You Know” – I feel like I should love this song because I’m usually a fan of this kind of music, but it just bothers me so much that these five girls just don’t sound like singers. They sound like five pretty girls that were told to sing a few notes and do a few body waves on stage – akin to, I don’t know, Paris Hilton pursuing a singing career. And maybe that harsh statement can be applied to K-pop all over, but I have a pretty high tolerance for mediocre girl groups and Brave Girls is the first group that has genuinely given me this certain vibe.

Maya: “So Pain, So Sad” – She’s awesome, but that blazer really isn’t doing much for her. And I usually swear by the blazer look, too. :( Also, what’s with the random shot of the French(?) fans waving CNBLUE and U-Kiss posters? I love CNBLUE and U-Kiss (and K-pop globalization) as much as the next girl, but that was totally unnecessary.

Dalmatian: “Not Him (Remix)” As good, if not better than the original. The top hat definitely gives this version the edge, in my opinion.

NS Yoonji: “Talk Talk Talk” – Outfit-wise and song-wise, I’m usually a fan of this kind of ‘cute’ – but the pink hearts and the pink balloons are a bit much. As well as the fact that this doesn’t feel like NS Yoonji’s style. Like, at all.

Clover: “La Vida Loca” – This is one of the few songs that hooks me in right at the beginning of the song, rather than at the chorus. Good job.

ZE:A: “Here I Am” – They look like they should all be on an episode of Star Golden Bell.

Yangpa: “Hurt” – There’s something about her voice that makes her sound so old-school. I like that. I don’t like the obligatory mini-string orchestra in the background. Can we kill this trend already?

Lee Hyun: “Although You Said So (feat. Mighty Mouth)” – Lee Hyun impresses as always, but I don’t think this song was as well-structured as “You Are The Best Of My Life.” Also, I definitely expected better from Mighty Mouth; he kinda sounds like a higher-pitched version of SHINee’s Minho here.

Dal Shabet: “Pink Rocket” – The little ‘beeping’ sounds are really the only things that genuinely bother me about this song. Consequently, I can’t stand that their choreography is almost completely based around those stupid beeping sounds.

Tony Ahn: “Top Star” – Okay, Tony, I know how you intentionally poke fun at yourself on “100 Out of 100,” but this isn’t funny. You are thirty-two years old. Please act like it.

Rainbow: “To Me” – My girls, my girls! I see they switched up the outfits this week; their shirts are light pink instead of white. Loving the effort, DSP.

Kim Tae-woo: “Resonate” – It’s been about four weeks and I still love it, dramatic key change (and avvies) and all.

U-Kiss: “0330” – Apparently France really loves them some U-Kiss. And so do I, but it still looks like middle school musical theatre to me. Sorry. Also, are Eli’s rapping skills slowly deteriorating? I’m beginning to prefer Dongho after him. Huh. But Kevin is absolute love in this.

4minute: “Mirror Mirror” – Love the performances, not loving the song (save for, like, the first seven seconds).

CNBLUE: “Intuition” – I’ve always wondered why non-pop music fans don’t place as heavy an emphasis on live performance as pop music fans (hence why K-pp has these weekly music shows every week), but after watching CNBLUE for four consecutive weeks, I’m beginning to believe that it’s because it’s simply a lot more exciting to see performers dancing on a stage rather than a rock band playing their instruments and ‘jamming’ to the music. But the benefit of television is that you can really see the facial expressions of the performers. I think that the ‘charisma’ behind CNBLUE’s live performances is primarily expressed in their facial expressions.

CNBLUE wins K-Chart for the week: