Plaigarism in Kpop - By a Western Artist?!? 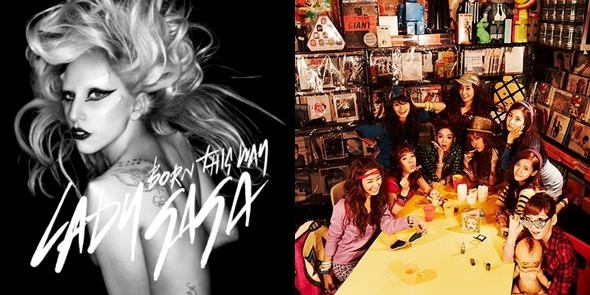 Yes, we have officially come full circle. Well known as an industry for “borrowing” other artists’ songs, I suppose So Nyeo Shi Dae have the honor of being the first k-group to be “borrowed” from.

And from Lady Gaga of all people. A video on Youtube (where else?) has materialized comparing Lady Gaga’s “Born This Way” and SNSD’s “Be Happy” from their ‘Oh’ album, and people were quick to point out the similarities:

Listeners say if you lower the pitch of SNSD’s song they sound even more alike, and to add more to the police file, “Be Happy” was released on their album  last year, January 28, 2010 while Lady Gaga’s “Born This Way” was released as a single last February 11, 2011.

I may have mentioned this before, but it’s not uncommon for artists to share songs, beats and melodies, particularly if they work with international producers as SNSD has been known to do. Again, Madonna did it first and did it better. Shove this “controversy” back in the egg.

Now k-pop, you’re on notice for making me say something overwhelmingly supportive of Madonna (though I do admire her).