Last week, MBC announced that DBSK would be making an appearance on ‘Knee-Drop Guru,’ a variety program known for hosting honest talks with stars. However, DBSK’s guest appearance on the show sparked particular interest due to the fact that the filming was done in tip-top secrecy, as to not leak any confidential and possibly controversial remarks prior to the show’s March 2nd airing.

What kind of remarks? It is said that the duo will discuss matters ranging from the troubles faced by the group these past two years, to the departure of the three members, to the relationship between the members while DBSK was preparing for its comeback. Heavy stuff, I’d say. It’s said that the show was filmed in a comfortable atmosphere because of Yunho’s friendly relationship with host Kang Ho-dong. To be honest, though, I’m still kind of skeptical – it’s not to say that SM is prone to sweeping everything under the carpet, but there’s a line where one must distinguish matters that are fit for public digestion, and matters that are not. It’s not ‘hiding things’; it’s being professional. I don’t doubt the fact that Yunho and Changmin’s remarks will be frank, but they certainly won’t reveal everything, and fans should approach things with this in mind.

Anyhoo. Today, MBC revealed a few still photos from the filming. Check them out below: 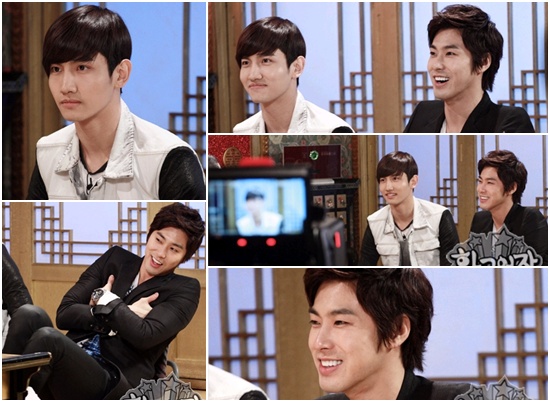