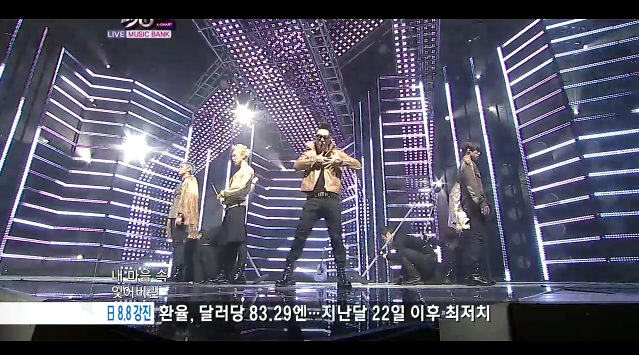 This week’s Music Bank is brought to you by KBS…and their decision to finally let Big Bang perform on the show. Four for you, KBS; you go KBS. Now without further ado:

Jewelry: “Back It Up (Remix)”: I like this song enough, but it makes them sound like a rookie group with a rookie song.

Dalmatian: “Not Him”: Never really noticed it before, but Mr. Blue Hair is kinda cute.

Kim Hyung-joon: “Oh! Ah!”: I’ve never been a big fan of his voice, but I love this song – not necessarily because it’s in direct alignment with my musical tastes, but because it fits him so well. More on that in next week’s album review. *wink*

Teen Top: “Supa Luv (Remix)”: This could’ve been a really good song, but I just hate everything about their vocal execution here. Oh well. It’s their goodbye stage; I shouldn’t dig on them too much.

Kan Mi-yeon: “Paparazzi”: This is also beginning to grow on me, despite her dead fish eyes face. She just doesn’t own the stage like a former member of a legendary girl group, and that’s a shame.

Song Ji-eun: “Crazy”: Apparently Ji-eun was too cool to show up for the actual recording, so they showed her music video instead. The plotline is okay, but they shot and lit everything like a K-drama. Not really sure how to describe it in technical terms, but bottom line: it might’ve been a cool idea in theory, but ultimately, it just looks a little cheap.

K.Will: “Can’t Open Up My Lips”/”My Heart Beating”: Can this man sing to me forever? Please?

MBLAQ: “Again”: Oh, so they have a bajillion versions of the same outfits in different colors? It’s going to be one of THOSE deals? *facepalm*

Mighty Mouth (feat. Soya): “Tok Tok”: If there’s one performance that’s worth watching every week, it’s this one.

Lee Hyun: “You Are The Best Of My Life”: Once again, going up against Big Bang for K-Chart sucks. But that doesn’t change the fact that this is kind of amazing.

Big Bang: “Tonight”: As the MuBank-meister here at Seoulbeats, I’m glad to finally get my personal share of Big Bang. I don’t know what it is about YG artists and their ability to inject so much life into their performances, but I like it, dangit.

Other performances from this week (will be updated with links when available):

Sori (feat. Crispi Crunch): “The Heart Is Dancing” <– digging this song like mad at the mo’. Highly recommend.

Hong Kyung-min: “Love Is What You Did But Regret Is…”

M4: “How You Encountered”