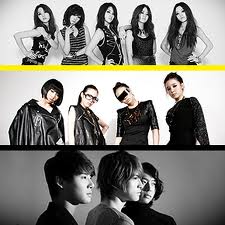 It’s been dominating the American airwaves for the past several and is likely heavily covered in other countries as well. Japan felt the power of a 8.9 magnitude earthquake on Friday, which also caused a devastating tsunami that is being felt as far as California, leaving considerable damage in the state’s northern areas. Oregon is in danger of feeling its effects as well.

With the body count still incomplete, hundreds of Japanese are confirmed dead and more injured. Naturally, with the number of kpop artists now promoting in Japan, fans have raised questions about the stars’ safety.

An official from YG Entertainment reassured fans that 2Ne1 are safe, “We are not able to directly contact the members by phone probably due to the earthquake causing problems with transmission. Just now, we received news from another affiliated individual within Tokyo that the girls were safe.”

KARA has also been confirmed to be safe. Should airports resume full operations, they will return to Korea on March 12th, as planned as will 2Ne1. JYJ’s Junsu also tweeted his response to the earthquake. “I have never felt anything like this before. The tremor, I felt it today” He is also worried about returning back to Korea for JYJ’s upcoming first official fanmeet on the 11th. “I have to go to the fanmeeting tomorrow more than anything… (I’m) not sure whether there are flights available.”

In what must be a relief for JYJ fans, their fan meeting will continue as scheduled. They released the statement:

To the fans who are participating in the fan meeting:

The JYJ fan meeting will take place on March 12th at 3PM without any disruptions.

Kim Junsu will board a plane tonight, will return to Korea, and take a rest. He will participate in the fan meeting tomorrow. We discussed this with Junsu and decided that the fan meeting will take place as planned.

With regards to the onsite ticket sales we announced at around 6 initially, because the cancellation of the tickets did not take place today, we have decided not to sell JYJ fan meeting tickets onsite tomorrow.

However, the disaster has obviously put a hold on other activities. A Kim Hyung Joon fan meeting for the 14th is postponed, and 2Ne1, who were to make their on-stage debut on the show Music Station, have their activities postponed as well.

YG said that they will continue to monitor the situation. On the state of 2NE1’s well-being, the representative stated, “2NE1 was staying in one of the well-designed buildings in Japan, but because of the strength of the earthquake, the walls cracked. Unfortunately, 2NE1 cannot showcase their debut performance, but they are safe and without harm, so it’s a relief.”

As far as South Korea itself is concerned, they felt no impact from the earthquake at all, though according to reports, aftershocks were felt as far away as Beijing.

Our prayers go out to those currently suffering the devastation of this disaster in Japan, and here at home.