What 5 Things in Kpop made the coming Spring brighter? A ring ding diva and Mate on Sketchbook, Sweet Potatoes’ last moments, Music Bank Special stages, some great cuts from the Director, MTV meets Mnet, and can you smeeellll what the Running Man’s got cooking?  These are the 5 Things that happened in Kpop last week that I think were a little bit more special than the rest.

On last week’s Yoo Hee-yeol’s Sketchbook, Korean music legend Insooni heated up the stage, which is nothing new, but I enjoyed her take on SHINee‘s “Ring Ding Dong.”

Another great performance was by K-indie band Mate. This was one of their last performances before going on hiatus due to lead guitarist Im Heon-il leaving to serve his two years of mandatory service.

I don’t know how I forgot it, but Mate also had a great performance on Mnet’s Sound Plex last week.

Sweet last moments for the Gogumas

Ah, first the Adams and now the Gogumas. Hopefully, We Got Married can survive this latest departure.  I loved how Seohyun faked out Yong-hwa by saying she hadn’t been practicing her guitar and then proceeded to sing “The Banmal Song” for him in banmal.

It’s a bittersweet ending for fans who are happy that Yong-hwa and Seohyun are so successful individually that they are too busy to continue filming for the show. Speaking of being busy, loved this comeback performance of  “Love Riding the Rain” by C.N. Blue on last week’s Inkigayo.

I have to admit that I was a little disappointed in the Super Dance Battle between the rookie boy bands Dalmatian, Infinite, and ZE:A.

But, I thought that the special stage by Wheesung, Lee Hyun, and K.Will was awesome.

I find it weird that even with these special stages and a bunch of comebacks, C.N.Blue was given over 8 minutes and sang a total of three songs for their comeback debut.  Love C.N. Blue, so not complaining about them getting a long spot, just saying that I think the PD of Music Bank is full of s**t.  He said that Big Bang and YGE were being unreasonable in their demands to appear on the show wanting to do three songs and that Music Bank treated all artists fairly (Big Bang eventually debuted on Music Bank only performing ONE song, Tonight).

Director’s Cut is one of my fave Kvarieties for music, its jam sessions with sunbaes and hoobaes in the Korean music industry are classic. This week’s guests included Lee Jung and Kim Jae-wook, check out their cuts below

Mnet’s new music show Mnet’s Sound Plex is a great new show reminiscient of MTV’s Unplugged.  It’s an intimate setting with some of Korea’s top musicians performing live and then being interviewed and answering questions and interacting with fans.  What I wouldn’t have paid to have been able to be there for Big Bang‘s taping of this show.

After Daesung finally got caught, it was time for their night mission.  The teams had to draw a list of ingredients for a certain Korean dish for two of their teammates to go buy at the store.  I thought the game was a little unfair because Daesung’s team’s dish needed less ingredients and looked to be less complicated while Kim Jong-kook’s team had to make what I’m thinking was Budae jjigae which has a ton of ingredients and included one item that any local of Hawaii can spot anywhere. 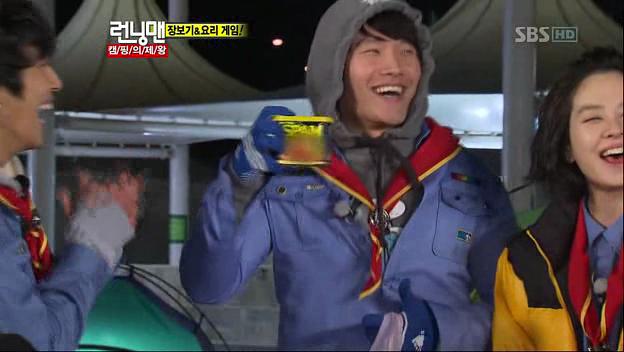 Yup, that would be  “The Hawaiian Steak”- SPAM.  I didn’t know SPAM was popular in Korea, but apparently it is (I also saw a can of SPAM on another Korean show last week, but I can’t remember which).  They even have SPAM gift sets.

Do you smeeeelllll what the Running Man is cooking?  After their cooking mission ended (some say in controversy because Daesung and Jae-suk cheated by using ramyun seasoning to win which was against the rules), the next game was all about being able to resist some savory aromas, the first one that swallows loses.

Haha was so twisted, dashing in and stealing meat and kim chee like some kind of animal, a monkey or raccoon I’d say.