2PM to sing for Japanese anime

Singing theme songs for movies and dramas have always been an effective way to promote an artiste. Just look at how many soundtracks have gone on to become popular hits among fans! Viewers may develop a liking for the song if it is used at the appropriate moments, and often, singers gain recognition just by singing theme songs. Thus, it’s no surprise that 2PM will be employing the same marketing tactic in Japan. 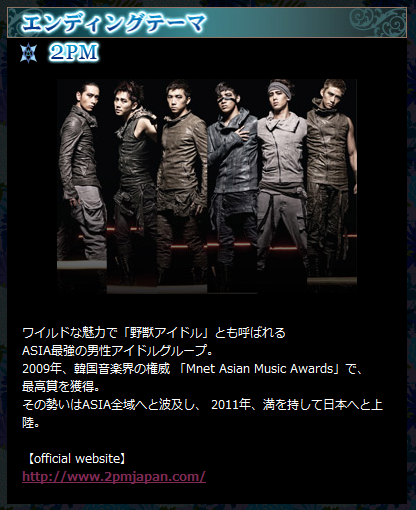 The boys will be singing the new ending theme song on the next season of manga-turned-anime Ao No Exorcist (Blue Exorcist). Since 2PM will be making their official Japanese debut early this year, this would enable them to reach out to Japanese fans with their music. This might even be a chance for them to introduce themselves to anime viewers, considering the popularity of anime in Japan.

I’m not sure about you, but I always get this weird, resigned feeling when I hear about K-pop idols crossing over to the Land of the Rising Sun. I mean, BoA did it, then DBSK, and Big Bang followed. Afterwards it’s like this steady stream of Korean singers flowing towards the Japanese market, hoping to earn some quick bucks away from the over-saturated Korean music industry and gain some international fame.

If there’s moolah to be made, I guess there’s no stopping Korean entertainment agencies. But what happens back home then, if all the top idol groups start setting their sights on Japan? What would happen to the Korean fans?