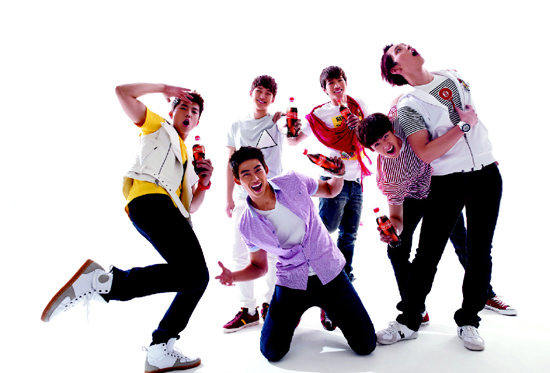 Ok, so I may be being just a little overly harsh and critical. But this whole CF is an assault on my senses. My vision is blurred by the rainbow of skinny jeans and prints, and my ears are ringing from the sounds of 2PM singing a cheerful song about…”Coke Time”???

Let’s be honest though- the last time we saw this many pairs of legs clad in colorful denim was right around the madness that was the “Gee” craze. And the last thing I needed to feast my eyes on was Taecyeon and Wooyoung doing their signature break dancing poses in orange and red pants.  (Seriously-MY. EYES.) I understand what the people behind this concept are trying to do with the “Open Happiness” campaign and the idea of “coloring” the world with happiness; it also makes complete sense for them to look for a popular idol group to represent them. And having had 2PM as their models before, it was natural for Coke and 2PM to team up again. I just don’t think that 2PM and this concept were a match made in soda pop heaven.

I’m actually quite shocked that the people over at Coca Cola couldn’t come up with something better. Even with the concept- if they had had the group merely walking around giving out bottles and making people smile, it would have made sense. But the impromptu flash-mob dance session in the square? Bizarro. Not to mention the fashion. SO. MUCH. COLOR. Though I never really think that 2PM are all that “beastly” this brand of cutesy-aegyo just looks ridiculous on them as a group. To be fair, Junho, Nichkhun, and Wooyoung can easily pull it off with a big smile and a wink, but Chansung, Taec, and Junsu look pretty absurd doing the Wiggles-Teletubbies type dance moves and skipping down the street (literally- see Taecyeon). So absurd that I was cringing and laughing at the same time.

Perhaps that’s what they were going for?!

The CF is fine. Nice and short and smiley.

The MV is 3 minutes and 17 seconds of an alternate Twilight-Zone-type KPOP universe. One that I don’t think I want to be a part of…

Now I’m really thirsty. Where’s 2PM when I need them to spread ridiculously colorful cheer and a Coke? A Coke might be just what I need to stop being so grumpy and hating on this…