The reason why Super Junior’s Siwon is in the centre 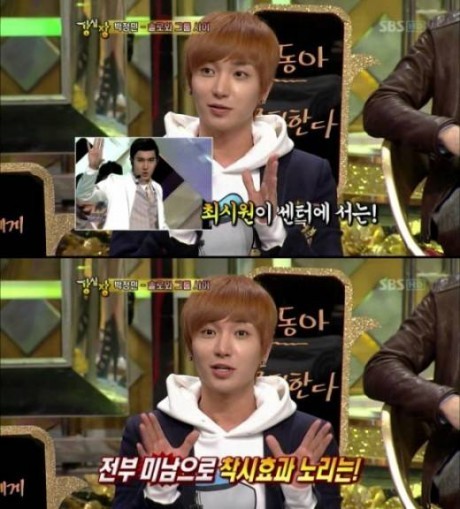 Almost every idol group has someone called the “Centre”, which basically refers to the member who is always standing in the coveted middle during performances and photo-shoots etc. For SNSD, there’s Yoona; for Wonder Girls, there’s Sohee; and the same goes for many other K-pop groups out there. Super Junior is also no exception.

On the February 1st episode of SBS’s Strong Heart, Super Junior’s Lee-teuk revealed the reason why member Siwon is always seen in the centre. He stated, “When Siwon stands in the centre, it gives the illusion that all Super Junior members look handsome”.

This does make sense in a warped kind of way. Usually, people’s eyes are drawn to the person in the middle, and it is said that if the “centre” is the best-looking or most charismatic member of the group, the others seem to be more attractive than if they were posing alone.

What if Shindong were to replace Siwon? The chubby member responded that after watching Jung Won-kwan of Fire Truck, he realised the importance of first impressions. If he stood in the centre position, Super Junior would turn into a “fat group” instead. (I literally LOL-ed at this. Shindong, you’re not THAT fat!)

Still, the “centre” position isn’t always the best one, especially in big groups like Super Junior. Leeteuk added, “In album jacket photos, because we have 13 members, the center stands where the jacket folds. Centers are positioned well in groups with only five to six members.”

B2ST is different though, revealed leader Doo-joon, who was also present on the show. Apparently, B2ST’s choreographer makes sure that such issues are avoided by arranging all 6 members in a circle without any centre, “so that every mother could spot their son”.

It sucks sometimes when the more talented members are pushed to the back because they don’t look as striking, while the popular, better-looking but less skilled members are given the spotlight. But if it’s for the greater good of the entire group, then I guess the Shindongs of each group just have to grit their teeth and deal with it. We live in an unfair world, after all!