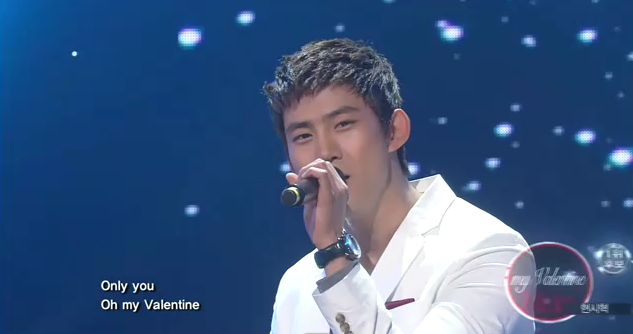 Call me weird, but I’ve always kinda had a thing for K-pop idols who can’t (or don’t usually) sing. It’s just one of those things where you hear Minho or Nichkhun sing a solo for a first time and even if it’s not all that great, you’re still all starry-eyed anyway because omg just look at him he’s actually SINGING…

So it’s probably no surprise that I reacted in the same way when 2PM‘s Taecyeon briefly showcased his singing skill(?) during the latest episode of Dream High. This week, Taecyeon’s character took to the (make-believe) Music Bank stage and sang a solo version of “My Valentine”. Check it out below:

“My Valentine” was originally recorded by Taec, Nichkhun, and JYP for the Dream High soundtrack – and you hear Taecyeon sing on the recorded version, but it’s not the same as seeing him perform it live. For a guy who is confined to the angry rapper role in 2PM and has the scars of “My Ear’s Candy” in his past, I was kinda impressed.

Dream High airs Monday and Tuesday nights on KBS2, and will be finishing up its 16-episode run next week.