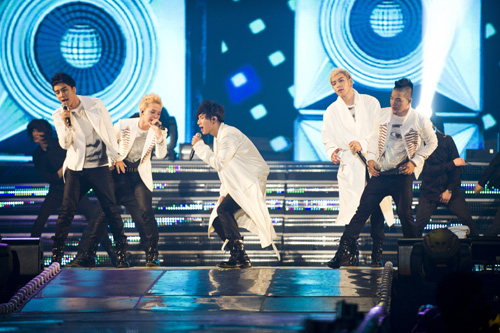 Big Bang‘s big comeback began with the release of their newest mini album Tonight on February 24th, which immediately topped all the charts getting an all-kill in the ROK and breaking the top 10 on iTunes in several countries. What followed next was three days of their sold out Big Show 2011 concerts from the 25th – 27th, and lucky for international fans, some VIPs were able to get some fancams even with the super strict security (where some got kicked out of the concert if caught).  Enjoy some of the fan cams that are out there.

And even a vid of the whole gang’s NGs from their Secret Garden parody- apparently there was a whole lotta kissing going on with T.O.P. locking lips with Seungri and G-Dragon (who looked pretty hot as a girl). Daesung looked pretty convincing as the mom and Taeyang looks better with his fauxhawk.

If you’re interested in seeing more fan cams try here, here, and here.  There are also tons of pics out there including what goodies were for sale, some great fan accounts, and a list of stars that also attended the concert.

Don’t forget that Big Bang’s SBS comeback special The Big Bang Show will air at 12:00 midnight on February 27th in Korea, which is less than 2 hours from now and can be watched live streaming here.