A Letter to Kara's Goo Hara

Hi. I’m not a big fan of Kara, but I must say that you girls have certainly been making news lately. I was already surprised when news of your group’s contract issues surfaced, but now you have definitely earned my undying respect with your recent scandal with 2PM’s Chansung. I totally understand; he’s a big hottie and fangirls all over the world would kill to be in your place. Trust me, if I could I wouldn’t hesitate for a second.

Oh wait! My apologies. Apparently, you guys were only practicing for your script during filming in Pattaya, Thailand, for KBS’s Lunar New Year special King of Idols. Both JYP Entertainment and DSP Entertainment acknowledged your close friendship, but maintained that all the rumors are untrue and everything took place in a professional setting. Here I was, thinking you two were busy cosying up by the poolside at a holiday resort…

But then, what about this? Are you actually touching another male idol’s chest??! 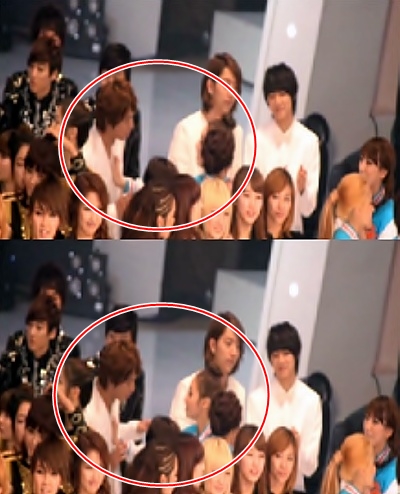 This supposedly took place on December 30th last year, during the KBS Music Festival, where many other idols were present as well. I don’t know what you were thinking, girl, but getting touchy-feely with CNBlue’s Yong-hwa right in front of fans isn’t exactly wise, you know? You were lucky to get through unscathed. In fact, I’m even surprised these pictures took so long to surface. Or maybe I’m just slow, but I digress.

Your group’s representatives are once again at hand to explain these pictures. According to them, you have a natural outgoing personality and have several friends of both genders because of this, plus you’re a pro at making conversation and everyone feels comfortable with you. That’s why you’re so popular with seniors and broadcasters. In fact, they claim that the scandal is a big surprise because “the entire world” knows you’re best-buds, or even like siblings, with Chansung and Yonghwa. How can we make up these rumors with just a few screencaps? Everything is just a really big misunderstanding.

All these explanations seem perfectly valid, but then again, isn’t this “we’re just close friends” excuse getting old? Heck, it has been used for practically every rumored relationship between idols. There’s nothing wrong with making new friends, darling, but I’ve got a word of advice for you: When you’re someone who’s always in the spotlight, you’ve got to practise some discretion when interacting with the opposite gender. Especially if the guy (or in your case, guys) is a male idol with legions of fans watching his every move.

I’m crossing my fingers that you won’t be photographed with a THIRD guy tomorrow. Just focus on Kara and be a good girl, all right?

P.S: FYI, I mean no harm and sincerely hope you aren’t offended.