WonderBangin' to the New Year 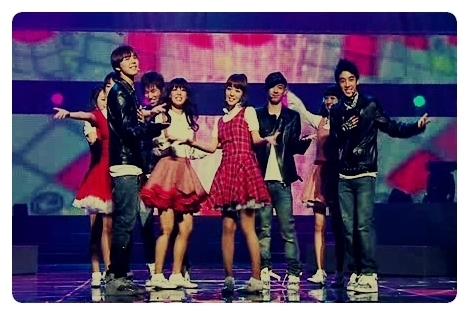 Has there ever been a more awkward fan name than Wonderbang? Yet and still, nearly four years later, fans are still yearning to get these two groups back on stage together.

In 2007, when Big Bang and the Wonder Girls were still rookies and idol groups had yet to overpopulate the Earth, the two were often paired with each other for special stages, and through the years they have done quite a few together. At the height of both groups’ popularity, fan demand prompted another special stage for 2008’s MBC Gayo Daejun. And both groups were never seen again.

Just kidding- of course Big Bang have all  been working on individual projects and the Wonder Girls are focused on world domination. In a way it seems oddly appropriate in a year when both groups are reportedly releasing new albums, that fans would want to see them together again.

Still,  there’s 2PM, 2NE1 and well- the music scene has changed dramatically from just  a few years ago. If, by some chance, we were to see some special performance, I would like to see how the personal maturity and musical  growth of both groups would intermix with each other.

Wonderbang fans held an organized campaign in 2009 and actually received written response from PD’s, so it’s not that crazy of a pipe dream. A fan page is already promoting their cause in earnest, so if this is your sort of thing, saddle up!

But hey, while you guys are at it, maybe you could have an official name change? Like, maybe Big Wonder instead? Because doing a Google image search for the word “Wonderbang”  is intensely traumatizing.

Every good campaign has a strong foundation in social media, so peep the officially official campaign video below: