"Why/Keep your Head Down" to DBSK? II

Because being a Cassie almost never felt so good. 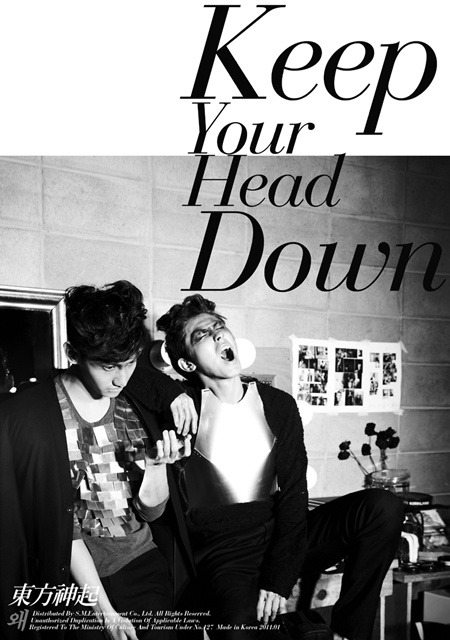 DBSK‘s 5th Korean Studio Album, “Keep Your Head Down” has just released and thank God it did because for such ear candy to be locked away from the senses of human perception would have been a pure and utter blasphemy!

“Why (Keep Your Head Down)”– A powerhouse of a track that exudes confidence, sex appeal, and passion.

“믿기 싫은 이야기” (The Story I Don’t Want to Believe)“- A magically beautiful ballad that tugs at not only your heart, but the fond memories of why I, and many fans, fell in love with DBSK.

“Maximum“- A perfect auditory representation of what masculinity would, could, and SHOULD, sound like.

“Honey Funny Bunny“- Yunho’s solo track which reinvents the ballad genre as well as assumptions about Yunho’s range. An absurd title and unfortunately, my least favorite track due to Yunho’s sometimes nasally voice, but a sharp contrast to Yunho’s last solo track “Checkmate.”

“Confession“- Changmin’s solo track which coincidentally happens to be my least favorite. Though Changmin delivers with his vocals that curl around my heart and soul and his touching personally penned lyrics, the production sounds like a typical ballad from a typical chick flick that typically makes me want to gag.

“Our GAME“- A refreshing track of musical conceit, powerful rapping and vocals, as well as atmosphere.

“She“- A clean ballad consisting of clean production and clean vocals.

“Athena (OST)“- A haunting track that presents us with the best of DBSK vocally.

Consisting of tracks (with the exception of “Confession”) that are produced with perfection, originality, and appeal the album really shines. The vocals (excluding Yunho’s occasional nasal episodes) sing with maturity, control, and power.   Keep Your Head Down is an album not one to merely keep on iTunes, but rather an album that is a trophy to DBSK, Cassiopeia, and any lover of music, poetry, or anything beautiful. So rush out and buy your copy now.