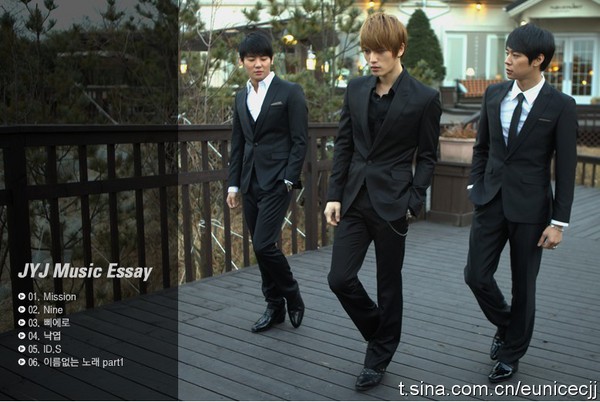 DBSK‘s (or HoMin’s, if you prefer) recent two-membered comeback to the K-pop scene has stirred up a storm that has finally extended beyond the reaches of Cassiopeia and made its way to the members themselves – all five of them.

JYJ and HoMin have stayed relatively silent about the dark cloud that has hung over the DBSK name for the past year or so, but with recent interviews, it looks like the members are finally opening up and talking about the situation.

Now, with the release of JYJ’s Korean album, the members may be talking louder than ever before. Entitled “Their Rooms, Our Story” and billed as a “music essay” featuring the members’ original compositions alongside photos and personal essays, the album includes ten new Korean songs. Some of these songs (“Nine,” “Pierrot,” “Fallen Leaves”) were presented at JYJ’s Seoul concert last year, and struck chords within the DBSK fan community. But none of them can compare to this.

The lyrics to Yoochun‘s self-composed piece, “Song Without A Name,” were recently released. It’s primarily a rap piece, and what better way to convey lyrics such as these:

Have I ever told you this.

After a probation period of a few months in 2003, we, the team members, finished our first task with ease
In 2004, we were the employee of the month, with countless top results, but we couldn’t feel content with just that
We were unable to contain ourselves and we started wanting more.

2005, we embarked into the overseas market, we thought everything would go smoothly like it had in Korea.
On our first attempt, we had the worst results possible and that was when my confidence started to drop.

A language we couldn’t even speak
Every day we’d be at our lodgings or the office
An imprisonment that they claimed wasn’t an imprisonment, saying it was for our own good

One day, we finally reached that top position we had so earnestly wanted
We each took our phones and contacted our families and friends.

That day had finally arrived.
From then on, everything started to go so well.

Records selling hundreds of thousands, winning every award out there and harvesting the fruits of our labor.
It felt like even when we cried, those tears dropped softly

You have already changed. (I can’t stay in that spot forever)
I’ll be the first to turn my back on you. (I can’t be shedding tears forever)
I’ll call out your name, though you keep going so far away (Fly me high into that sky)

We had been running for quite some time.
When we were surrounded by an unexpected, big wall
And the thought, ‘Has it always been this dark’ stayed in my head for a long time.

Once, this happened.
With the ever growing business expenses, and the increasing debts
The situation became something I could no longer handle on my own

Our CEO had once said these words to us
Tell me whenever you need something. Because we will always be family to each other.

Tell me whenever you need something.
Remembering those words, I took the courage to call him and ask him a favor.

Though I had this strange feeling inside of me, he was the only person I could rely on back then.
Because we were a family who would stay together forever.

Though I built up the courage to ask him a favor, all I received was a cold refusal.
His words made me so mad, but I contained myself and asked him once more to help me out.

He hung up on me.

I couldn’t stop the tears streaming down my face.
I couldn’t think straight because he wasn’t the family I had always believed he was till then.

When he needed us, we were family to him. When we needed him, we were strangers.

More amazing things happened as more time passed.
Hearing that we had finally struck gold overseas and brought in results so unimaginably astronomical,
I walked into the office with a spring in my step to receive my pay.

Our team members were looking at each other with excited gazes.
We complimented each other on how hard we had worked.

But the statement of accounts we received said we were at a deficit
I thought I had seen the figures wrong so I checked again
Everything was listed under expenses
Damn it, how could all that money have gone towards paying expenses.
What kind of expenses were there to make that much money vanish?

I couldn’t believe my eyes so I asked them to show me the detailed statement of accounts that I had never seen before.
They told me they would show it to me, but I ended up never seeing those few sheets of paper as all I did was work.

The amount of questions I had grew the more time passed.
The headaches grew the more our team members got together and thought about it.

Sure, let’s say they were. We, the kind souls, will let that one slide.
We will forget it, for the company, and for us, who have been together for so many years.
But that isn’t right, those aren’t things you should be saying to us.

Were you seriously planning on disappointing us till the very end?
When you called, all you did was talk about our team members behind each other’s back, it was so hard to trust you.

This is exactly like what our seniors said. Did you want to keep the ones who’d still willingly make money for you?
A senior told me that the family the company always talked about, would make it hard for us to survive if we left the company
Those words refuse to leave my mind

Though I have so much more to say,
I can’t because I feel so frustrated at the thought that someone will torment us more when this song is released.

Anyway, though life is hard, we are working hard and doing well.
We are trying to really smile though we continue to be tormented by someone.

This effort of ours is not the effort of a mere product.
It is the effort that is driven by the thought
That we want to die with no regrets when we leave this earth.

Yesterday and tomorrow, though I’ve thought about it all day long
I can truly feel the difference between then and now at 25, my age

I will now put this pen down.
But my heart it at ease right now.

Because I am able to feel the love of our fans……
I’m thinking of sharing the load I have kept in my heart all this time.
Though nothing is ever easy, my heart is at ease.
I’m happy because we have our fans for our family,
I’m always thinking of you all……
I love you.

So could you believe in us till the end.
Could you tell us that you love us.
We’ll work hard till forever, so could you stay by our side.

I promise, that I’ll show you everything eventually.
Yes, we are JYJ.

“You have raised the palace walls and firmly closed the door
They say that love is not imprisonment
Love is letting go to fly freely
But I don’t even expect that much
For we, who you made, are not even worth half of half of half of that.
We are nothing but eternal frogs living in a well.”
(Excerpt from the musical ‘Mozart!’)

Though I still have so much to say
I will end it here.

Here’s the one minute preview of the song:

I won’t lie: I was kinda left speechless after reading these lyrics. Although, like always, everything must be taken with a pinch of salt, no one can deny the potential power of Yoochun’s words, and the incriminating blow it takes against SM Entertainment. Will SM take a stand against the release of the album, or is the power of music really as free as it seems? With this latest twist in the emotional battle between the Gods of the East, no one can know for sure.