For us non-Brazillians who don’t have a clue what the video is about other than the fact that Seungri is in it, have no fear! The video is basically this Brazilian TV programme, Rede TV, showing how Seungri has managed to carve a name for himself in South America, or more particularly, Brazil! 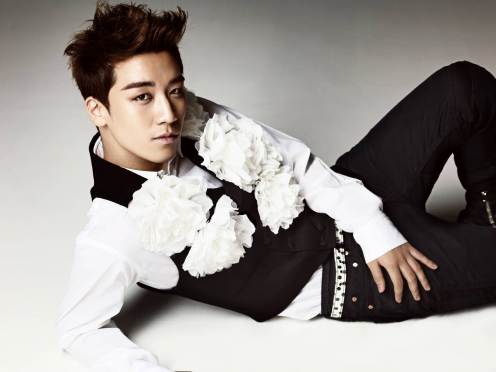 The host talks about how Justin Bieber and Justin Timberlake are both big names in the American pop music industry, and their popularity is so extreme globally that even the music styles of South Korean singers are influenced by these 2 Justins. Case in point? Seungri’s new album, VVIP, which has apparently caught the eye of Americans as his music style seems remarkably similar to the 2 Justins and even Usher as well.  The show claims that there are “some similarities with Usher, Timberlake and Bieber”; I’m guessing that they are referring to how Seungri has managed to combine all 3 music styles to create a distinct one of his own.

According to the video, Justin Bieber’s “Somebody To Love” is still frequently played on the radio, whereas Justin Timberlake’s hit song “Sexy Back” was the “start of everything”. The 2 Justins managed to hit the top spots in music rankings, but their legacies will continue to live on because “Seungri is the man”. VVIP is reportedly shooting up online music charts and becoming highly popular on the Korean radios.

The video then ends with the host proclaiming that VVIP is paving the way for Seungri to enter the American markets, and the 2 famous Justins should keep an eye out for this up-and-coming singer. Wow, the Brazilians (or rather, the producer of this particular programme) really do hold Seungri in high esteem, don’t they?

Personally, I’m pleasantly surprised that Seungri has such immense popularity internationally, such that he’s even considered a threat in America. I mean, even in Big Bang, he’s known for being the maknae who-sorry VIPs-simply can’t measure up to his very talented hyungs. Which isn’t exactly his fault, I admit. Seeing how Big Bang is getting increasingly well-known in the United States, with their talents being acknowledged by Diplo (an American DJ, producer and song-writer), maybe it’d be a matter of time before they become a world-wide sensation!