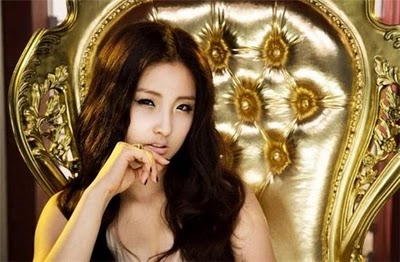 4Minute recently concluded a concert in Malaysia, along with labelmates BEAST and G.NA from Cube Entertainment. However, not many people knew that behind the group’s fierce and powerful performance, leader Ji-hyun had been in poor health even before reaching Malaysia.

A representative from Cube Entertainment stated that ever since the New Year, Ji-hyun had been suffering from a severe cold. Unfortunately, instead of getting better, her condition worsened when she had to travel from South Korea to Malaysia and experienced the drastic temperature change.

Although the company had urged Ji-hyun to go on a break with her family to prevent harming her body even more, Ji-hyun was too concerned for the other members. She felt that it was her responsibility as the leader to complete the performance and other scheduled activities with them.

Okay, I’ve got to admit, I don’t understand why idol groups even have “leaders”. I mean, why bother? In many cases, from my POV, leaders don’t really have much say in their groups anyway-most of the time, they’re just called leaders because they’re the oldest. But it’s still a rather heroic and self-sacrificing gesture for Ji-hyun, I guess!

The representative assured fans that Ji-hyun was currently receiving treatment and taking care of her health so she could recover quickly. Meanwhile, Cube Entertainment has also announced that 4Minute is planning to release a new album soon.

Korean idols are just so hardworking; even when they’re sick or injured, they still go out there to make their fans happy. We appreciate it, seriously…But just don’t get yourself killed in the process. If you’re going to collapse, take a break, see a doctor, or check yourself into the hospital ASAP!