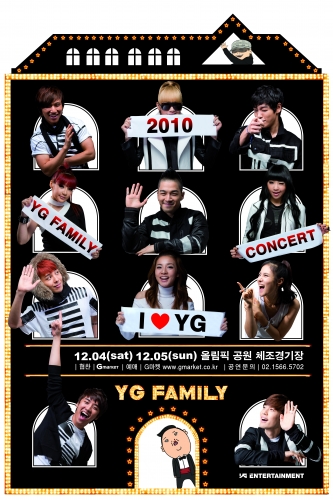 The one that started it all for Big Bang, “Lies.”  WTF is up with G-Dragon’s hair!  Bad stylist noona, BAD!

2NE1, try to follow them while clapping your hands.

Bom and Gummy “You and I”

The hoobaes did tributes to their sunbaes. First up Big Bang and Se7en doing 1TYM‘s “HOT.”

The whole Family got together to wish for peace and unity with their rendition of “We Are The World.” How’s T.O.P. trying to channel some Bruce Springstein?

And last, but not least, a little snippet of Daesung.

Omo, what has that drama done to Dae-dae?  He just ripped open his shirt at the concert… I like it!

Those were some of the best fan cams I could find, but if you know of any others that are just as good or better, spread the love by sharing them in the comments below. You can also find more videos at the channels I have listed below. Be sure to include a quick thanks to all those who uploaded the fan cams for those of us who were unable to go to the concert.