SNSD Will Invade A J-Drama 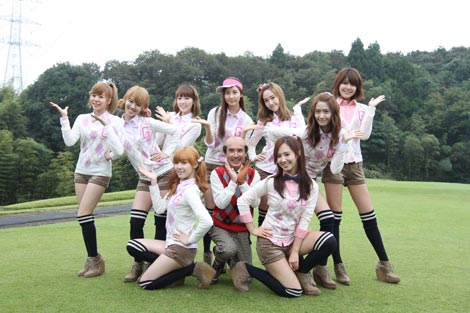 They will be making a guest appearance on SAZAE-San 3‘s New Year special as golf caddies in a dream sequence. I know what you’re thinking, but relax. The dream sequence is culturally inspired for the show and not just some old man’s “special dream.” Many Japanese believe that your first dream of the New Year will indicate your fortunes for the rest of the year. Although, it does seem like the producers found a way to mix both culture and fantasy together with this casting choice. The episode will air in Japan on January 2, 2011.

The producer of the drama, Asano Sumi, had this to say, “While I was searching for someone suitable for the New Year’s special, I saw SNSD’s cute promotional video, and I felt them sparkle, they were exactly who I would want to see while drinking tea with all of my family.” The girls’ appearance is short, but it’s a scene that leaves a vivid impression.