Zipped, or unzipped. That, is the question.

The netizens are in a tizzy due to some pics of Beast from the December issue of Marie Claire Korea that were released.  Why?  In one pic, Doo-joon appears fully clothed beside a model in a tub full of bubbles and it appears as if he was thinking of joining her as netizens spotted what appeared to be his pants unzipped. 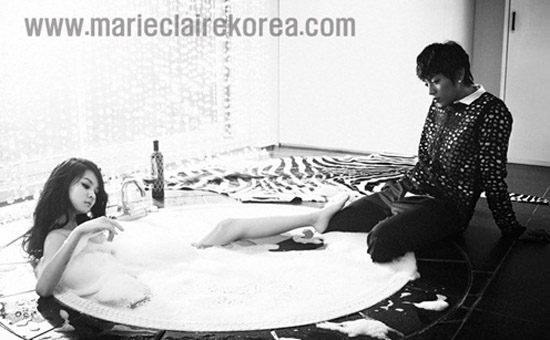 I’d have to say that it does look unzipped, but Doo-joon quickly responded via his Twitter that his pants were indeed zipped.  The white that fans saw was just his shirt, not his underwear.  He did however also tell fans that they should wait for the magazine to be released and buy it because they’ll be much more shocking pics to be revealed.  Oooh, give that boy a marketing degree, I think he just sold a WHOLE bunch of Marie Claires for December.  I know I want one.