Taeyeon and Sooyoung only have lips for each other 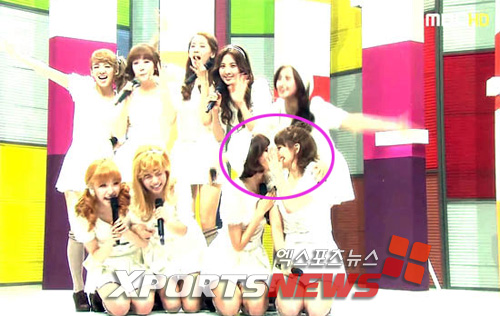 Well, this is embarrassing. I am the official Music Core recapper after all, but how can you catch something happening when you don’t expect anything to?

Anyways, Sooyoung kissed a girl and she liked it, Taeyeon ‘kissed a girl’ and so on and so on. This would be small potatoes in the States.

On the 30th MBC “Music Core”, SNSD appeared in white dresses and with their first song “Best Friend”.

During the song’s ending, Taeyeon and Sooyoung cover their mouth with their hand and had a kiss performance, making the audience shocked (really?).

The viewers who saw this said their opinions. “Performance was good, it was a bit uncomfortable to see girl groups kiss.”

“I don’t know if they really kissed but it was good to see their close relations”.

SM Entertainment, embarrassed delighted by the fresh new scandal felt it necessary to explain, “The performance was staged to highlight friendship among the members only”.

Yet, if any of the guy groups so much as touched knees, fans would be setting up wedding registries for them. Again, coming from a Western perspective, this is complete opposite land.