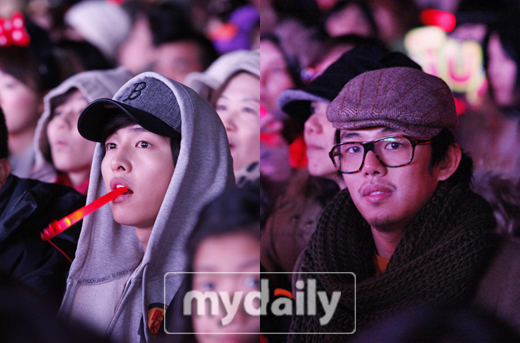 There was a mini reunion of sorts for 3 out of 4 of the Jalgeum Quartet at the JYJ Worldwide Concert in Seoul on the 27th.  Song Joong-ki and Yoo Ah-in attended the concert to support their Sungkyunkwan castmate and friend Park Yoochun.

The duo was also showed on the big screen at the concert to the delight of fans (courtesy of @Xiahella).

Fans of Sungkyunkwan Scandal were excited to see the friends supporting Micky.  A lot of fans were ware that Yoo Ah-in would be attending the concert due to tweets between he and Micky.

Here’s a report from the concert that has interviews with some of the fans and JYJ themselves.  Micky looks good, but I miss Lee Sun-joon, Jaejoong is handsome as always, and Junsu needs to lay off the eyeliner.

If you’re interested in seeing more of JYJ’s concert in Seoul, there are a lot of fan cams out there, you just gotta look.  For good measure, here’s one of Jaejoong from the concert on the 28th singing “For You It’s Separation, To Me It’s Waiting” from the Sungkyunkwan Scandal OST. Love Jaejoong, but what’s up with the wings?