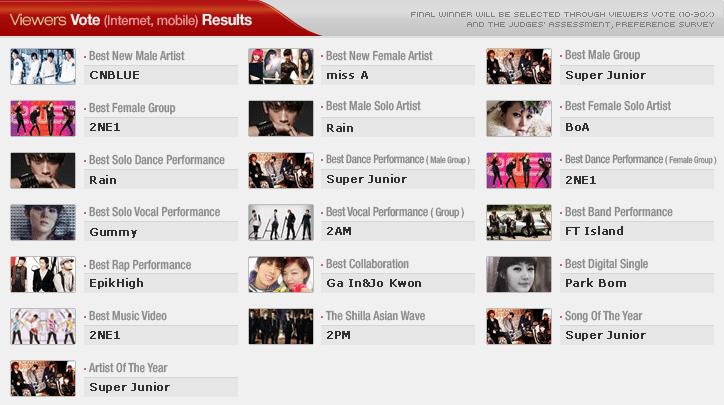 Three days left to go till the “Mnet Asian Music Awards” and online and mobile voting has been closed.

Preliminary results show that non-attendee Super Junior is leading the pack with wins in 4 categories. Rookie group of 2009 2NE1 don’t disappoint with three nominations. Best New Male and Female Artists are also being led by CNBLUE and miss A respectively. This round of voting makes up 10-30% of the final decision derived from industry professionals’ deliberations and physical and digital sales of albums.

Obvious absentees from the crop of idols are KARA, Beast and Girls’ Generation. Just like last year, both fans and netizens are suspecting that results have been tweaked in favour of artists who have confirmed their attendance. This doesn’t exactly justify how Mnet ‘allowed’ an SM group to come out tops four times but is making me wonder how they’ll handle it if Suju do win. Just in case some of you are unaware, SM has bluntly turned down sending any groups to the awards ceremony despite prospective wins.

Despite the furor, I think for a show at this scale, it’s only practical that attendees get priority. Unlike bigger award ceremonies like say, the Teen Choice Awards or any others under the MTV umbrella, the MAMAs place emphasis on music and cannot afford to have half the show presented on satellite video, or showing pre-recorded footage of stars and their Thank-You messages.

But then there’s also the tension between Mnet and SM bubbling under the surface. As much as tweaking results takes the fairness out of the judges’ decisions, I think weight on the situation falls squarely on the fact that Mnet is unable to forge a better relationship with SM.

Regardless, I’m sure a whole horde of us will still be tuning in this year. Where I am, a local TV station will be broadcasting it live and what would I give to see these performances on my HD screen? :)

If you’re located in Asia, check out how you might be able to catch the MAMAs live on November 28th: 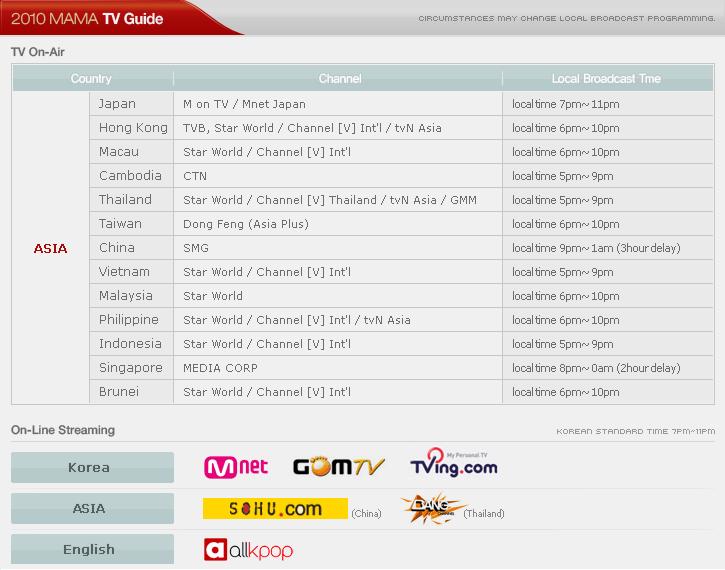