Daesung and Sulli for Sammy's Adventures 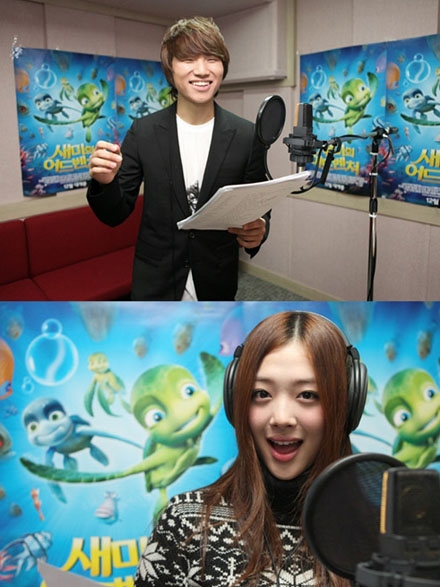 Big Bang‘s Daesung and f(x)‘s Sulli voice the main characters of Sammy and Shelly in the Korean release of the 3D animated movie Sammy’s Adventures: The Secret Passage.  The film follows Sammy the sea turtle’s life for 50 years in his fight to survive from birth until his old age.  While following the lives of Sammy and his friends Shelly and Ray (played by comedian Yoon Hyung-bin aka Wang Bi-ho) around the world, the film also shows the effects of global warming on the lives of ocean creatures.  The original Sammy movie was released in August 2010 and is a Belgian film.  A short clip of Daesung and Sulli in the studio doing their voice overs has been released.

This is the first time that both Daesung and Sulli have ever done voice over work.  The Korean version of Sammy’s Adventures: The Secret Passage will be released on December 16th.  If you’re interested in learning more about the movie, check out its official site here.