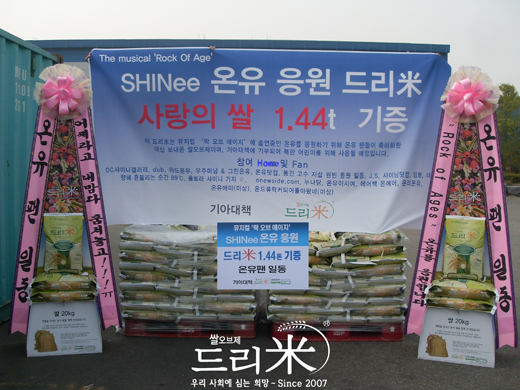 All together now: AWWWWWW~

It’s a common practice for fans to give their favorite idol star a crapload of rice, with the expectation that the idol will then donate said crapload of rice to a charity of their choice. Fans of SHINee‘s Onew recently showed up to one of his performances in Rock of Ages with 1.44 tons of rice. According to fans that were able to catch a glimpse of the donation, it seems that 1.44 tons of rice really is as much rice as you would think.

Onew donated the 1.44 tons of Dreame rice to help feed North Korean children, and according to a Dreame representative, the rice was delivered to an Incheon storehouse on the 16th and was sent to North Korea on the 22nd. He participated in a similar charity act during his time in Brothers Were Brave, during which time he donated 770 kilos of rice to help feed hungry South Korean children