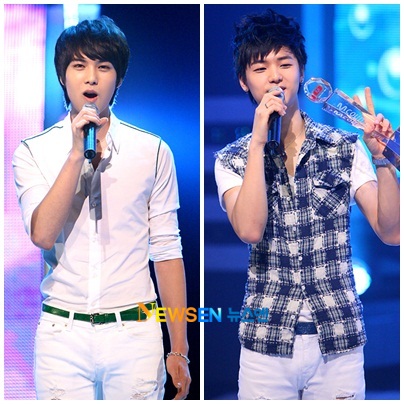 C.N. Blue members Lee Jong-hyun and Kang Min-hyuk are making their acting debut in the indie film Acoustic.  The movie is actually made up of three stories: one starring Shin Se-kyung, another starring Jong-hyun and Min-hyuk, and a third starring 2AM’s Seulong and actress Baek Jin-hee.  An MV for Jong-hyun and Min-hyuk’s song for the movie’s OST “High Fly” has just been released.  The MV is made up of clips from the movie and it appears as though the characters Jong-hyun and Min-hyuk play are those of starving musicians trying to find their way in the world.  The song is upbeat and is highlighted by Jong-hyun’s sweet vocals, check it out.

I’m digging the song and the MV is cute, Jong-hyun and Min-hyuk look just adorable in the clips.  The one thing I hear when listening to the song is joy…  it’s just a happy feeling like it’s about their love of music no matter what difficulties they encounter because of it.  I’ve said it before, but one of the things I love about watching Min-hyuk perform is that he always seems genuinely happy to be playing the drums.  Try looking at his face when he performs, it’s filled with pure joy and that is the same feel I get from this song.

Jong-hyun and Min-hyuk were scheduled to hit the red carpet on October 7th and 8th as actors for the film Acoustic at the Pusan International Film Festival.  Their agency, FNC Music has said that many more acting roles are being offered to the duo as well as C.N. Blue leader Jung Yong-hwa.