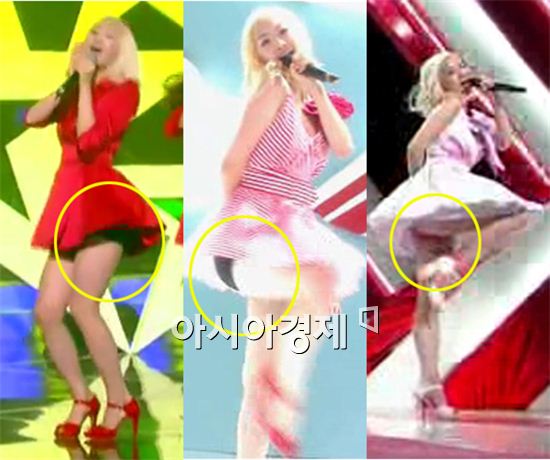 Idol fashion faux pas seem to be the main topic in the news recently.  The newest controversy surrounds Sistar‘s maknae Da Som and her overly visible underwear.  During Sistar’s performances of “Shady Girl” last week on the various music shows, netizens have complained of the costume choices for Da Som and how those costumes offer views of her underwear too often.  Because of the type of short poofy skirt they put on her costumes there was a high lift rate while dancing which were giving those conservative netizens fits of conservative indignation.

What brought on more complaints was Sistar’s August 29th Inkigayo performance where it appears they tried to make Da Som’s undies less noticeable by making her wear pink undies instead of the black ones used previously.  This however, had an opposite effect as netizens were saying that it looked like she wasn’t wearing undies at all.  Uh oh, check out the performance for yourself and see what you think.

It’s not really bad, but that is a casualty of having a short poofy skirt which probably wasn’t the best idea for a costume of a dancing idol.  Ah, netizens just because Da Som went blonde doesn’t mean she did a Paris.  I think this is just another example of bored, uptight netizens looking for something to be offended by.  Aigoo…