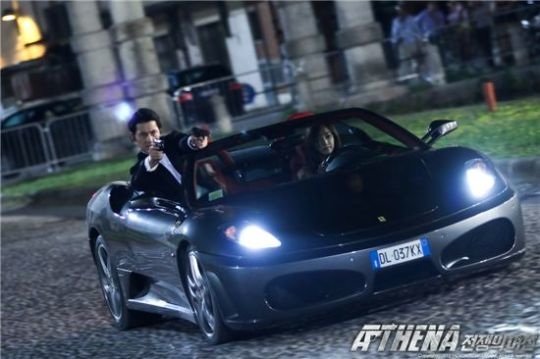 The cast and production crew of Athena: Goddess of War, the spin-off of 2009’s high-tech spy thriller IRIS, held a showcase on August 30 at Seoul’s Lotte World’s Garden Stage where viewers finally had some substantial scenes to keep them at bay until the drama’s November premiere. Even though a teaser was released last week, there’s nothing like a highlight reel to get you all excited as it shows some new scenes and more exposure of characters who haven’t been featured as much. While the teaser mostly featured the two leads Jung Woo Sung and Su Ae, the new scenes include more action from the supporting cast Lee Jia, Cha Seung Won, Kim Min Jong, and Super Junior’s resident thespian, Mr. Choi Siwon.

And of course everyone’s clothes and hair stay intact through all of the action scenes, only looking fashionably disheveled. That’s drama for ya. Will I watch it? Maybe. I feel that Athena isn’t going for the exact same tone as IRIS, which will probably be a good thing. IRIS tried a little too hard to be epic and badass that even T.O.P.’s sexiness couldn’t keep me a loyal viewer. With that said, Athena might be more fun for me. Also, BoA‘s special appearance doesn’t hurt, either.