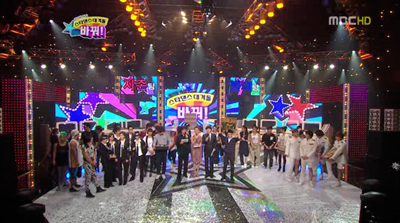 It’s that time of year again…Chuseok is right around the corner and SBS is on its heels, announcing first of what will likely be several idol specials for the holiday.

One of which will be SBS Chuseok special ‘Fantasy Star Couple Finals’ which pairs up different idols from different groups and lets them loose with whatever choreography they can muster.’We Got Married’ couple Nickhun and Victoria will be participating – but against each other.

SHINee’s Minho and Jonghyun will be pairing up with Secret, Jang Dongmin with Yoo Inna, and 2AM’s Im Seulong will be working with Noh Sayeon. Other stars include Yoo Chaeyoung with Seul Woondo, Kim Youngchul and Kim Nayoung, and Choi Philip and f(x)’s Sulli will be in one team as well.

2AM’s Jokwon will be transforming into Lady Gaga while T-Ara’s Jiyeon will be going for Michael Jackson. Kim Gwangyoo will be paired up with After School’s Gahee and perform a salsa dance while BEAST’s Lee Kikwang and 2AM’s Jinwoon and Changmin will be doing an abs show to the dance songs of male idol groups. Jang Yoonjung will be attempting Lee Hyori’s ‘Chitty Chitty Bang Bang’ with Simon D.

Consider it a kind of Korean “Dancing With the Stars” except awesome, courtesy of Jokwon Lady Gaga ! The program will air on the September 22nd at 6:15PM KST.