The DBSK maknae recently entertained an interview and photoshoot with Japan’s Non-no magazine. I don’t know what it is, but this kid is looking younger and younger every time he does a shoot. I don’t get it. 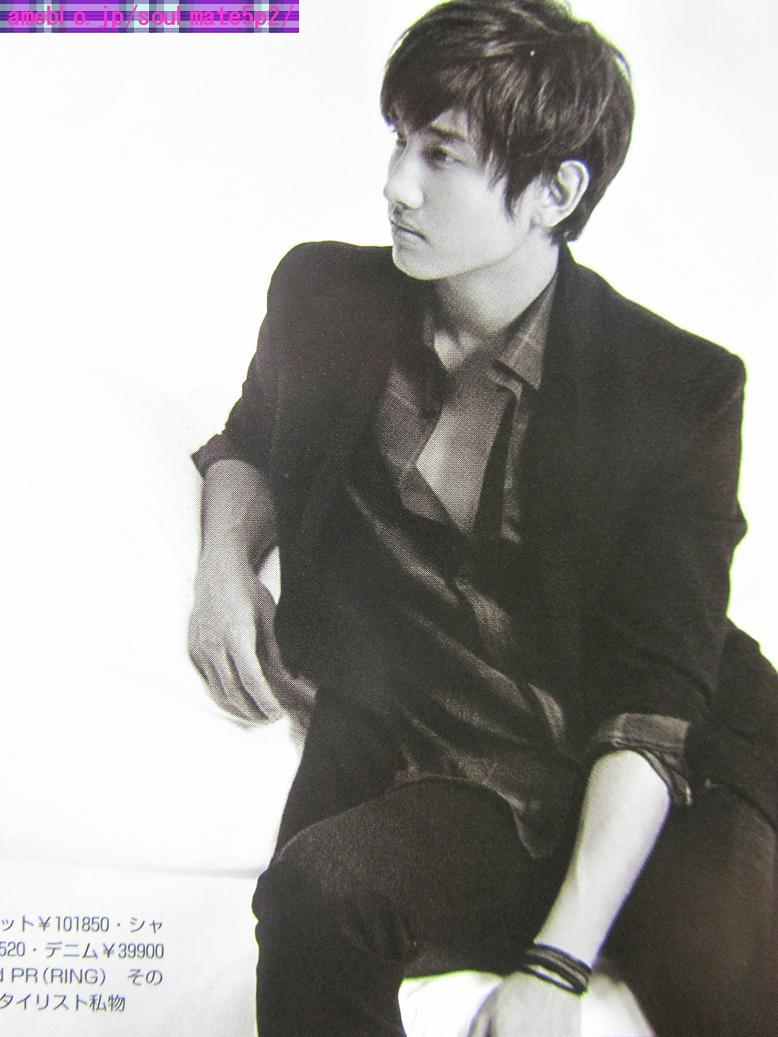 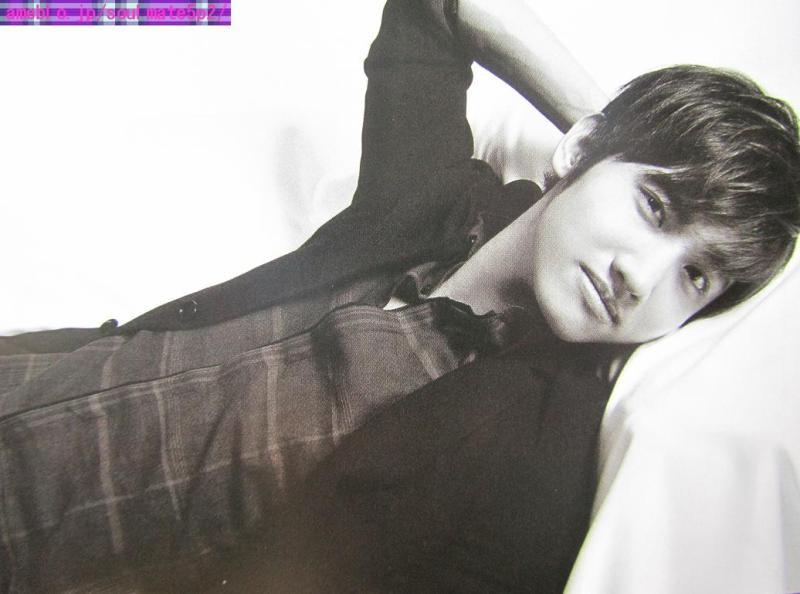 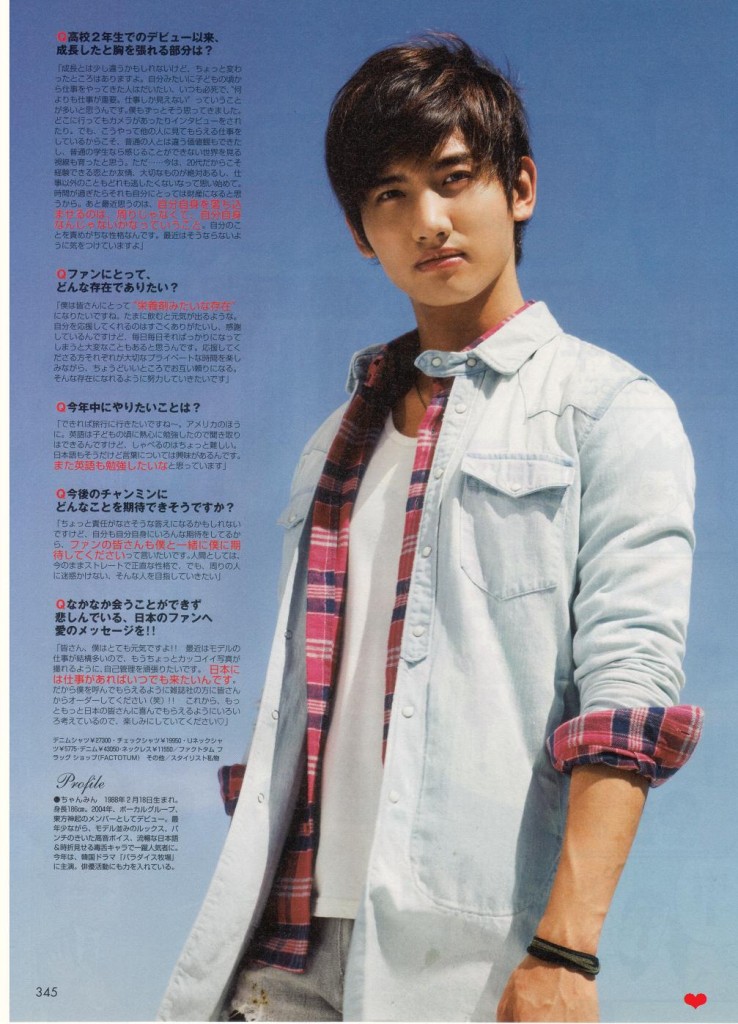 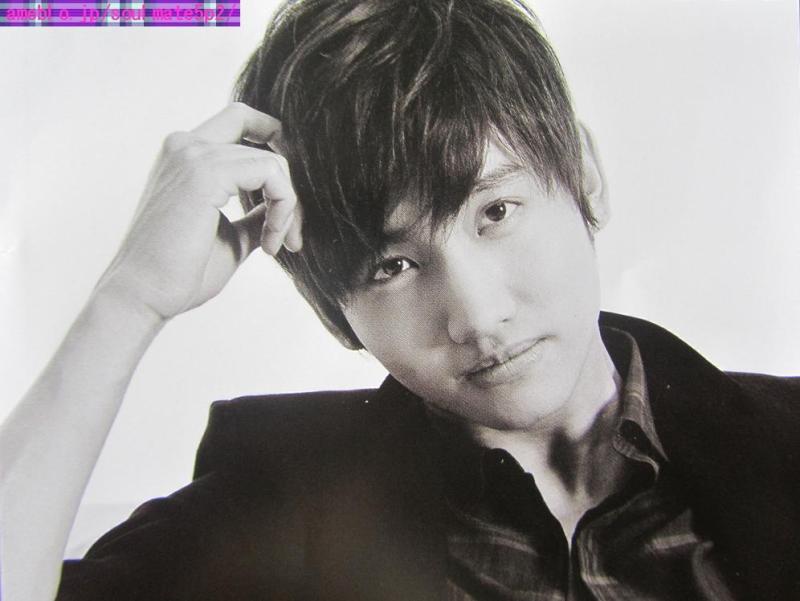 Yeah, about that last picture…

Q: It seems as though the filming for your debut television drama has been completed, what did you find most difficult?

Since the production for the drama lasted all the way from January to June this year, I honestly felt like it took forever. In Korea, dramas are usually broadcasted as they are being filmed, but since mine is being produced before its broadcast, things are a little out of the ordinary. However, because I had to film practically every day, it was tough managing my physical condition. In contrast to life as a singer, it demanded a lot more self-control. Also, since this was my first time, I wasn’t really able to get a good grasp on my own lifestyle. Even though the filming took place at Jeju Island, in the southern parts of Korea, I had to fly back and forth from Seoul to Jeju all the time, and sometimes even Japan. Having to travel around like that was actually quite exhausting.

Q: Is it true that Yunho came to show his support at your filming location?

Mmhm, he came twice. Once with some members of staff and once with some friends, they just came all of a sudden!! I was really scared. Yunho made me even more nervous than usual!! Because I wasn’t used to the filming location, I was also worried that I’d cause trouble for the staff. Of course, I was glad that he came. It wasn’t in Seoul or in Japan, he’d come all the way to Jeju Island just for me. But! I didn’t really feel all that at the time (laughs), so after his visit, I said to Yunho ‘Don’t come to the filming location unless you’ve made yourself an appointment!!’

Q: Artist (singer), actor, model, how are they different from one another?

When you sing, you’re conveying an entire story in the timespan of 3-4 minutes, whereas when you’re acting, you’ve got 40 minutes to an entire hour to portray a whole variety of emotions, some more extreme, some more subtle. You can’t really miss out any details, to me, it’s a lot more difficult than singing. Modelling is also quite different from singing and acting. You can’t straightforwardly express something. A lot of the time, when you’re being photographed, it’s more a matter of knowing how to work your expression to adequately match with the clothes you’re wearing. These kind of shoots are really difficult. But no matter what type of job it is, their similarity is that they demand one to express one’s feelings and emotions. I’ve been a shy person ever since I was young, so I’m really not good at communicating and interacting with other people. Recently, I’ve changed a lot. Becoming an actor during such difficult times has made me more conscious of my limits.

Q: What would be your ideal life?

I’m not like how I used to be, releasing singles and albums all the time, living a busy chaotic life. Up until now, I’ve always had packed schedules literally every day. This sudden decrease in work load… to be honest, I feel really lonely at times. For the past few years, my life has always been governed by my schedule, so I’m not really used to having so much time on my hands. At first I thought ‘Oh well, no worries, it’ll be okay.’ But now that I’m starting to get used to it, I’ve learnt to enjoy life. There are things that I can do to help myself grow and mature, I’ve got a lot of learning to do. Amongst all those things, right now, I’m most passionate about boxing. I started doing it because people kept persuading me, but I’ve come to realize that on top of being good for stress relief, it’s also an activity that brings you happiness. Whether it be my upper body or my lower body, rather than saying I’ve gotten more muscular, I think I just feel like my muscles have gotten harder. Besides that, I’ve learnt a lot with regards to acting, singing and dancing. Oh and I go to the boxing training centre all the time!! To me, a time like this is a time worth cherishing.
Q: What do you do when you’re at home?

Q: Where have you been going in your free time recently?

The basketball courts! I go around twice a week with Yunho and our manager. We play three against three. Even tough I’m not very good at it, I like sports that make me sweat. Since it’s pretty much like a public part there, it’s available 24 hours a day. We don’t just play basketball, we’ve been going bowling more frequently than we used to. Our scores now are around 150 points at best, and the average is around 120-130. This was never the case before! Besides wondering why bowling balls are so heavy, we’re really too interested in the rest (laughs).

I’ve been practising. When I listen to artists that I like, I’ll try and sing a long to their songs, imitating their enunciation and small habits. When I train myself like that, I’ll think ‘Oh, so this is where I’m lacking.’ I’ve been really obsessed with bands lately, not only Korean bands, but also Japanese, European and American groups, I quite like them. Lately, the song that I think is the best is Queen’s ‘Bohemian Rhapsody’. Even though I can’t really sing it too well, I really like the song. I listen to it all the time.

Q: How have you grown since debuting in your second year of high school?

I don’t thing ‘growing’ is really the right way to put it. There have been some changes. Most people who start working whilst they’re still in their childhood hold the same kind of attitude, they feel like everything revolves around work and they get to see or experience anything outside of it. I used to be like that too, I felt like I was always having cameras shoved in my face and being interviewed wherever I went. But because this is a job that I got from the hands of others, I also have slightly different values. I’ve developed my own perception of the world in ways that an ordinary student would never be able to comprehend. It’s just that I’m in my 20s now and I’m more capable of devoting myself to friendships and romantic relationships. Things like that need to be cherished and I don’t want to have to avoid them anymore. As time is lost, I’ve grown to really treasure these things. Recently, I’ve been thinking to myself that rather than those around me, I’m actually the one constantly confining and suppressing myself. I put a lot of pressure on myself and I’ve finally come to notice that. I’m not going to let myself do that.
Q: What do you want to be to your fans?

I want to be like a nutrient to other people. I hope that my presence will help raise people’s spirits. I’m really grateful of all the support I’ve received from everybody, but I think it would be really terrible if that becomes all they ever do. I hope that those who support me will learn to cherish and enjoy the time that they have and will learn to support one another. I’ll work hard to become that kind of person.

Q: What would you like to do the most this year?

If possible, I’d really like to go to the US. I was really passionate about learning English when I was young, so I can understand it pretty well, but speaking is a little more difficult. It’s the same with Japanese, so I’m actually really interested in languages at the moment. I really really want to learn English again.

Q: What can we expect from Changmin in the days to come?

Even though I feel a little irresponsible saying this, I really am expecting a lot from myself, so I hope that my fans are anticipating my future endeavours just as I am myself. As an individual, I hope that I’ll be able to remain the honest person I am without causing trouble for other people. That is the goal I will work towards.

Q: It’s a shame that there aren’t a lot of opportunities to meet with your fans. Please write a message to all of your Japanese supporters!

Hello everybody, I’m really doing very well! Since I’ve been modelling a lot more recently, I’ve been working very hard to maintain good physical condition so that I’ll be able to look as good as possible in my photoshoots. As long as there’s work for me in Japan, no matter when it is, I’ll always look forward to coming. Please place your orders with the staff here! (laughs) I’ll continue to try my hardest to bring happiness to those of you in Japan, so please look forward to it!