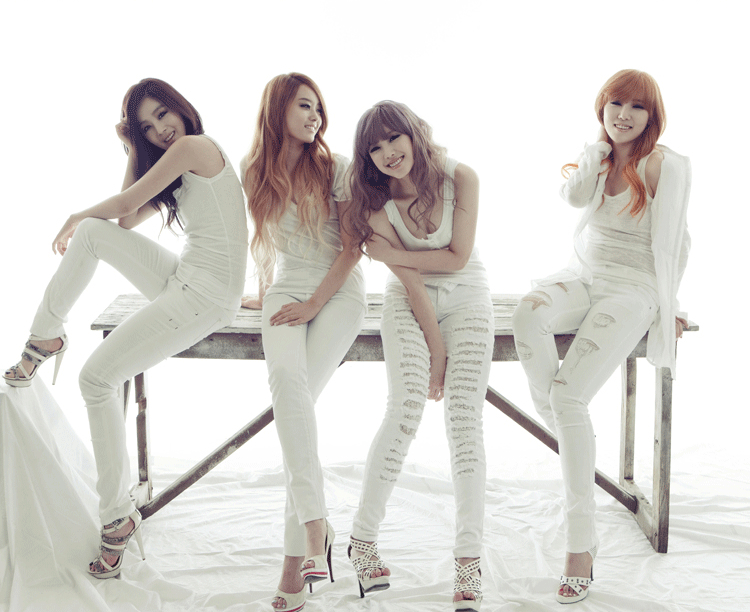 I’m easy, I know. To be fair, they got some cool points from me for one of their early songs, 3년 6개월 (3 Years 6 Months), because the tone and melody of it were just so different from what any other girl groups were doing and it was an addictive song. A year later, and their mini-album Madonna has only reinforced that feeling.

Aside from the title song, I could image the majority of their EP being in someone like 2NE1’s wheelhouse (stay with me, stay with me). Their songs have that pop, hip-hop, club fusion that makes the songs different – but not too different. Then the members each put their personal stamp on it.

What I like about Secret is they may not have eye-catching personalities but they are distinct instead of being Barbie clones.

I was skeptical of ‘Madonna’ when it was first released – the song is basically ‘Mazik’ part two. But you know what? It’s still a good song. Their producers are clearly trying to replicate a hot Beyonce-lite dance hit, and I would say that they were about 40% there.

But like T-ara’s debut album, it is the secondary songs that really grab me. I wish these girls would release a full album. Often on a kpop album or EP it is really the non-released songs that are a good barometer of the artist’s talent.

‘Lal Lal La’ and ‘Hesitant’ are nice songs that flow well and almost enter the realm of R&B. I swear every time I listen to ‘Hesitant’, suddenly it’s 2001 and I’m back in high school. It has an “old-school” sound that is addictive.

‘Do Better!’ is……………ok. It skews a lot closer to what is commonly released these days, and I wouldn’t be surprised if this becomes their second single. But that’s the problem. It’s a little too generic for me, and goodness knows we have enough of  “generic” these days.

I do not wear my emotions on my sleeve. But if there is one thing in life that will always hit a certain spot of my heart, it is a song with piano solo.

So, having revealed my bias, it is still a well done song and original in lieu of the typical ballad. I liked it when they used it for their teaser, and maybe Secret will surprise me and release this next instead. ‘Empty Space’ is not a chart topper, but it showcases the girls at their best – particularly Ji-eun, who is clearly The Voice of the group but overall, their voices blend together wonderfully.

All of this is to say….yes, I think Secret is underrated, and honestly (deep breath) I believe they deserve as many accolades and attention as 2NE1. I know in the entertainment business talent is only part of the package and the girls aren’t perfect. Ji-eun often looks awkward on stage, the other members are weak vocally and the Zinger/Hyo-sun weight loss was really unnecessary. But when they perform, I can’t get over the fact that they’re having fun (or look like it). They are mature, energetic, expressive and most of all, they are not performing for the oppas, or the ummas or the unnis or whoever. They are performing for themselves. As long as they continue, I’ll be on board until they win that mutizen, or Mnet award or whatever they’re giving the kids these days.

If you haven’t already, give this mini-album a listen. You may like what you hear.