I think it’s time, to let the Sun shine

Big Bang‘s Taeyang is set to heat up your summer with the release of his first full length solo album Solar. The album features 11 tracks with a wide variety of musical stylings. YGE has been teasing fans for the past two weeks by relaesing the album’s track names and teasers for the songs. 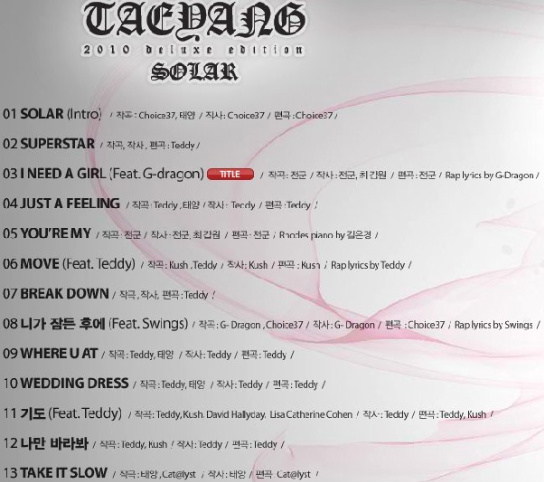 The above is the tracklist of the Deluxe edition in which there are two more tracks (tracks 12 & 13) than the normal edition. As usual YGE’s go to producer Teddy, seems at the helm of things with G-Dragon and Kush adding a little something-something here and there. If you haven’t already heard the teasers of the album check them out here.

Sounds good so far. Recently, T.O.P.‘s single “Turn It Up” was made available on itunes, I wonder if YGE will also make Taeyang’s Solar available for sale there- that’ll be good news for international fans.