Perhaps it’s because the photoshoot was in black and white that SM Entertainment’s R&B/pop boy band SHINee is looking less like their cheerful name implies (phonetically) and looking more mysterious and edgy in the latest issue of Numéro Korea.

Or maybe it’s just cuz we can’t tell whether or not they are wearing rainbow colored skinny jeans.

When I saw the first picture of Taemin and Jonghyun in the football helmets, I was like, “Oh yeah…this noona likes where this is going. The whole all-American-boy-playing-sports look. Me likey.” And I was hoping that the rest of the boys would be wearing boxing shorts and gloves, water polo uniforms, baseball jerseys, or something along those lines. Man was I wrong.

The picture of Onew isn’t bad-just a little awkward for this 20-something year old noona. I mean, it’s just a little shoulder showing, right?! Calm thyself!

And last, but most certainly not least (well actually, very much least-my least favorite) is the strange photo of Key and Minho. Is it just me or do they look like they just walked off the set of a children’s production of the Nutcracker meets Peter Pan? (Seriously what’s with the highwater pants and the knee-highs?!)

For a group of good-looking, really talented (and young! haha) singers and dancers, I think my biggest pet peeve with SHINee is their fashion. It’s not that it’s bad or that they wear pastel skinny jeans-really! I have never been anti-boys-who-wear-skinnies. It was just the Skittle and Easter colors that made me nauseous. But, since everyone else and their mom are wearing them now (even the boys of Big Bang and DBSK have started wearing colorful skinny jeans!!) I guess it’s alright for boys to wear girls’ pants. Maybe not “alright” but it’s growing on me. (Is this sexist of me? Maybe I am just jealous I don’t look as good as Taemin in pink skin-tight jeans.)

Anyway, my main complaint with SHINee’s fashion stems from the fact that they are always so matchy-matchy perfect that it’s obvious that they have been styled by a team of highly skilled (and most likely highly paid) SM stylists. A few more photos to refresh our collective memory: 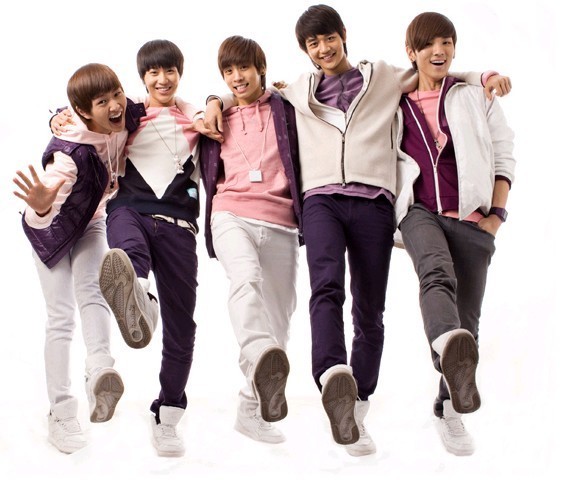 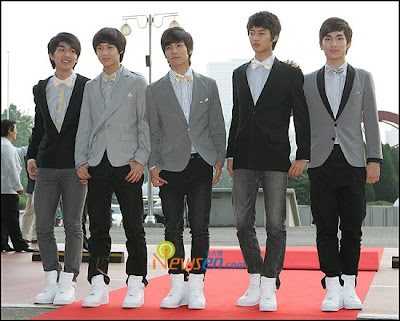 I appreciate that for a group described as an R&B/pop act (emphasis on the R&B) that they don’t stick to the R&B uniform of super saggy, butt cheeks-showing jeans, gold chains, tilted baseball caps and that unfortunately named top that we all refer to colloquially as the “wife beater.” (I mean, it’s a tank top that looks super hawt on lots of people-2PM‘s Jaebeom for instance. Can’t we call it a “sexy Jaebeom tank” instead of “wife-beater”?!! But I digress.) Although I am thrilled that SHINee ditched the more R&B look, it does seem that in the MV for their first single “Noona is so Pretty (Replay)” they did give the style a shot: Is it so hard for the SM styling team to give the boys some better, more individualistic, options? Or even let them wear whatever they want to? I realize they are young and may not have fashion sense of their own and hence, are prone to making even G-Dragon-esque errors, but I am pretty sure that they would never ever in their right mind choose, on their own, to wear this:

And I don’t think they could do any worse than that.