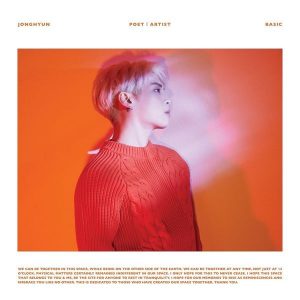 I once described Kim Jonghyun as a man obsessed. Indeed, much of his music evokes a sense of desperately needing something: love, help, time. With every release, there was an audible increase in his desire to reach some sort of musical zenith. Every album built upon the one before it in musical scope and depth, nuance and experimentation. With his final release, the aptly titled Poet | Artist, Jonghyun reached that peak, in fact stretched beyond it to give us a truly elegant piece of music.

The album opens a bit just like BASE and She Is before it: a playful composition with bright vocals to invite listeners in. Jonghyun definitely gets bonus points for avoiding the need to fall into the trend of moombah-pop that pervades much of K-pop now, opting for more direct ties to Latino music by infusing the sound with a more Samba-based composition. “Shinin’” is deceptively sweet, Jonghyun luring you in with promises of happiness, smiles, and all the stuff innocent dispositions are made of:

An aura is around your white skin
Even if I go blind, I wanna go closer, I don’t know
Feels like you’re the only one on this earth
It’s only you who walks, only you (you you).

But, taking a page out of Frank Ocean’s book, the best song wasn’t the single.

The album starts in earnest with the second track. “Only One You Need” draws from the same almost obsessive need one can hear in songs like “Cocktail” or “MONO (Drama),” if not in composition certainly in vocal direction. He takes this moment to dive further into House conventions, using classic construction: island House that defined much of the sound in the mid-’90s. It’s a sound that sits at the core of most of the album. It’s his natural inclinations as a man addicted to sensation, however, that drives it.

Jonghyun was deeply sensual, unapologetically so (if She Is is any indication). “Grease” shows how playful he was in that sensuality. The song doesn’t exactly ignite and explode. The flame’s already there, left flickering after a one-night stand. What he’s done in all his intelligence is gradually add more of the fuel of the song’s namesake and let those flames expand. This is a slow grind with a heat that simmers, never letting the listener (or the object of his affection-turned-ire) cool down from the touch and burn, no matter how much he claims to want to “clean it up, fix it up.” 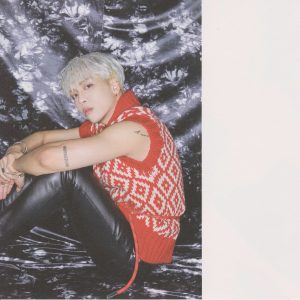 From tempting the curious with his ever-glowing flame, he implores listeners to take a leap of faith, close their eyes and just let the pulsating glow entice them. His sensual nature was second only to his musical fearlessness. With “Take a Dive,” he’s submerged himself in an emotion, a feeling about someone who’s sparked a curiosity, then obsession to find out just how deep he can go — and perhaps the suggestion that losing himself in something that adds “colors in my once colorless heart” wouldn’t be such a bad idea.

In “Rewind,” he takes it back to the original days of House, its birthplace in the Midwest, the whisper and snap of the genre when it was first taking baby steps out of hip-hop’s ever-expanding shadow.  Lyrically “Rewind” speaks of hovering in a constant state of limbo, but his insistent (again, obsessive) desire to start again propels the track, forcing lyric and composition to depend on one another.

Thus the absolute brilliance of this man. For those paying attention, Jonghyun has mastered the art of the subliminal message. The husky breathiness of it all, his counting to three in Korean, English, German, French, Japanese, and Spanish, the word “rewind” dropping all four on the floor throughout — a display so vulgar, it seems, KBS has banned the song from appearing on broadcasts (citing the use of Japanese as the song’s indiscretion). I was absolutely forced to rewind the track. It was unavoidable. Anyone who can dig that deep and stand firmly on the very roots of House music — I’m talking Frank Knuckles, Jamie Principle drips…. At this point I just have to accept that musically Jonghyun was a freak of nature — naturally freaky and ready to completely queer your understanding of who you thought he was.

Of course, even in the end, Jonghyun could never hide anything. The album seemed to be a purging of sorts, the last push of his creative muscles, and what a sprint to the finish it was. “Before Our Spring,” however, seems to be the last word. Even without trying to read too much into it, the lyrics are very plain. This was a man who was resigned to winter, even proclaiming he doesn’t want to see spring come, wanting to stay in this frozen moment where seeing someone smile is enough. But in the end, even with the admission that there’s something just… cold inside him that won’t let go, he assures his listener, “Don’t worry about what to do. I’m alright, spring will come to me too.”

Much of the first half of the album is subdued vocally. There’s a great deal of softness around the edges, nothing rushed or hurried. It’s languid like a… we’ll say long kiss goodnight for propriety’s sake. With the unhurried nature of the album, Jonghyun allowed himself to fully explore all his musical tastes. His appreciation of various ways of musical thought fed his artistry. Though there’s an undercurrent of the same type of almost throbbing push and pull throughout Poet | Artist, he manages to express it in so many ways. Horns to fill in quiet spaces with some sunshine. The bare heartache of a piano to stretch out an emotion to fit a song’s entirety. Clever bits of sex to illustrate that the itch inside him was so deep his poet needed to explore and his artist needed to act on it.

Jonghyun was a musical marvel. This isn’t a titter of sentimentality because of the circumstances surrounding the release. He understood the angles of music, the avenues you could take and where those streets would eventually put you. When delving into R&B, he dug deep for the soul of it. When he reached back into House’s warehouse origins, he explored every nook and cranny and came back with gold. There were moments when I just found myself laughing out loud, a gut reaction to something that impresses me so much it tickles the hell out of me.

While this was Jonghyun’s last project, this wasn’t a piece of music exploring sadness or hopelessness, at least not insofar as what may have taken him from us. No. This was a pure, unfiltered celebration of music for music’s sake, a deeper peek into who he was as an artist, and yes, a poet. It’s the intersection where sentimental poet meets self-indulgent artist. He explored that dichotomy, giving us every bit of his creativity by taking the time to explore it himself.

The music is varied, genres melting into one another, as if a painter giving us a landscape, then completely obliterating what we see by letting the wet bristles drip on the canvas. The scene is blurred, muddied, allowed to run on itself and down to the floor. I truly believe Poet | Artist was Jonghyun’s attempt to completely blur the line between the two entities. That hard vertical line between them is a theory, a moment for him to posit, “Well, what if…?” With this album he postulates when you allow yourself, one can’t exist without the other. 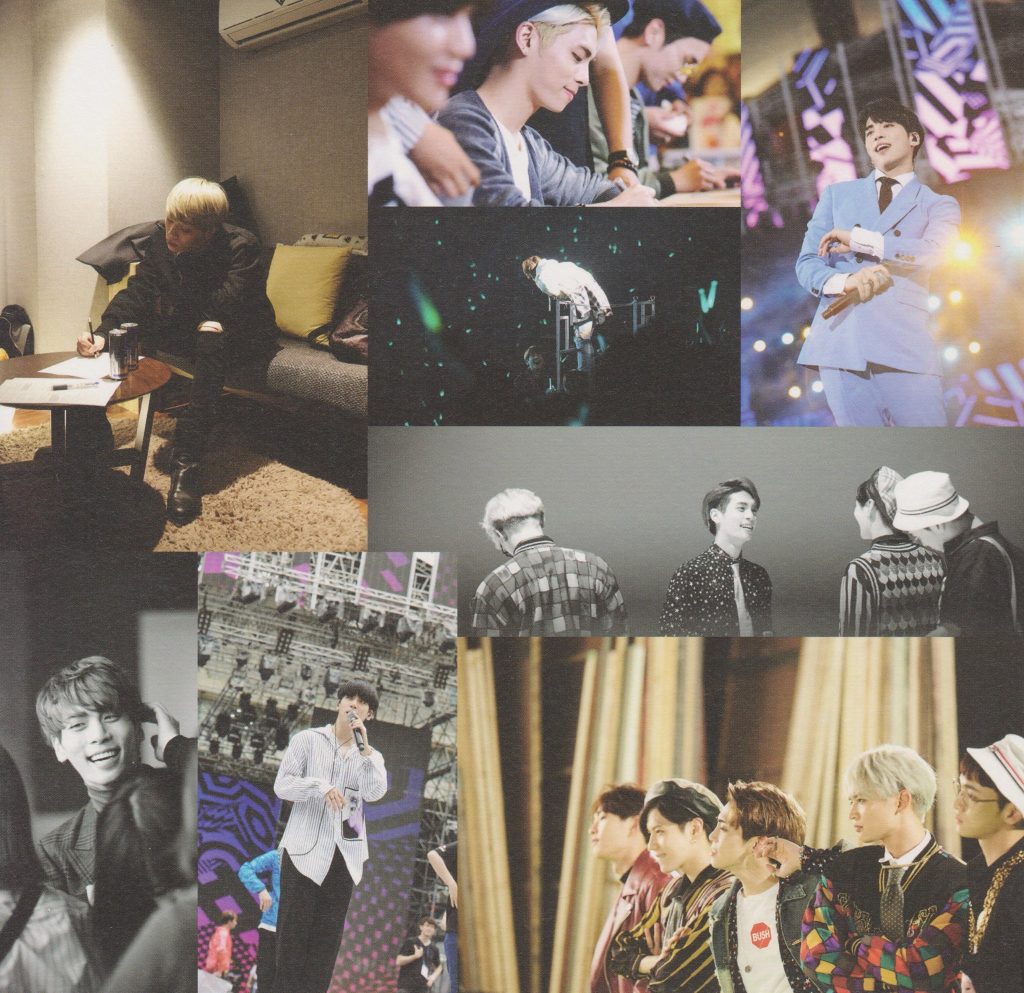 2016 was perhaps one of the most painful years in recent memory. There are a number of reasons for that, none more obvious than the passing of several of music’s most beloved, inspirational figures. David Bowie. Prince. Leonard Cohen. Maurice White. Sharon Jones. Phife Dawg. George Michael. Who would’ve guessed almost sixty years after what has been dubbed “The Day the Music Died” we’d hit another point where it seemed all the music in the world disappeared?

December 18, 2017. Just as we were trying to come to painful grips with the losses of Chester Bennington and Chris Cornell, a week before Christmas, another was taken from us. I won’t go into why those deaths in particular amid a list of legendary artists who passed stood out, but there’s very little reason to guess, is there? We all believe our favorite artists the most amazing creatures on the planet. Comes with the territory, I suppose. There’s no denying that Kim Jonghyun was special, and the world at large is a bit dimmer because he’s no longer in it.

It still hurts. It very well may for the rest of my life, to be honest. But I can now truly and with feeling say “You did well, Jonghyun” and mean it with everything that I am. This man hit an artistic pinnacle, and he did it earnestly with class and absolute fearlessness. All that’s left to say now is…