Wanna One Show Their Acting Skills With "Beautiful"

Only three months after their hugely successful debut, Wanna One are back with a repackage of their first album called 1-1=0 (Nothing Without You) and “Beautiful,” its lead single. Given the season and the fact that their previous single “Energetic” was an upbeat dance song, it was somehow expected for “Beautiful” to be a ballad. Similarly, unlike “Energetic”, “Beautiful” has a complex storyline in its music video.

In 2017 when thinking about monster rookies, it’s impossible not to think about Wanna One. Part of it is surely due to Produce 101 immense popularity, but it’s important to credit their individual skills and great teamwork. Wanna One, in fact, excel in all fields: singing, dancing, visuals and entertaining in variety shows. This time they added a new achievement to the list by proving that they can even act.

The movie version of “Beautiful” music video features an intriguing storyline, with the boys of Wanna One acting as themselves. The plot is very thick, but not very clear. Spectacularity often gets chosen over clarity, and the result is definitely confusing. It is recommended to watch the prologue before the music video, to try and get a better understanding of it.

The prologue of “Beautiful” starts with Cha Seung-won —special guest star— being a single father of two boys, Seongwoo and Daniel. As he’s rushingly moving out of his house with teary eyes along, Daniel gets left behind. The boy goes missing and is nowhere to be found by his father. He then gets welcomed into what seems like a christian orphanage and makes friends with eight other boys: Jisung, Seungwoon, Jaehwan, Woojin, Jihoon, Jinyoung, Daehwi and Guan Lin.

From these three minutes alone more than a few questions arise. The first one is surely why Cha Seung-won spent only so much time looking for his lost son. Was there a reason why he couldn’t have authorities help him? What made him leave the house he was living in with his family in a rush? It’s also not clear how Daniel ended up in the orphanage. Plot holes aside, Cha Seungwon is an amazing actor and it’s a pleasure to see him starring in a K-pop MV once more.

The MV fast forwards into the future where Daniel is all grown up and trains with his foster brothers to become a boxer. Most of them are still newcomers, but Jihoon has some more experience and natural talent. Daniel dreams of buying a motorbike and works hard at a convenience store to earn enough money to buy it. But he still hasn’t given up on finding his long lost brother Seongwoo.

Meanwhile Seongwoo lives a parallel life as Daniel’s: he is a Tae Kwon Do athlete, works part-time as a construction worker and dreams of becoming a policeman with his friend Minhyun. Seongwoo is actively trying to reach out to Daniel and eventually the two manage to reunite, sharing a hug. The blood brothers catch up and see their dreams coming true: Daniel buys the motorbike, Seongwoo gets admitted to a police academy.

Sadly, happiness is not meant to last long. Jihoon and his foster brothers get dragged into a fight with some shady individuals. When Jihoon gets his arm broken, Daniel comes to his rescue, but it’s Seongwoo who takes the blame for the fight and gets arrested. His dream of becoming a policeman is now crushed. Daniel decides to sell his motorbike to pay Seongwoo’s bail and to take the injured Jihoon’s place in an upcoming boxing competition. In the meantime, Seongwoo notices his brother sold his motorbike for him and overworks himself at his part-time job to buy it. The music video ends with Seongwoo passing out exhausted, falling down from a building.

The turn things take in the music videos’s storyline is pretty surreal at this point. It’s not clear why an innocent person got arrested for a fight he didn’t even take part in and why Daniel and his friends escaped, rather than trying to explain the situation to the police. The open ending also leaves a lot of questions unsolved, we don’t get to know the result of Daniel’s tournament and what happened to Seongwoo.

A music video of eight minutes is an ambitious project. It’s true that there is more room to tell an articulated story, but it has to be told in a clear and easily understandable way. A great example of this is T-ara’s “Cry Cry” music video — where Cha Seung-won also appears. In fifteen minutes the plot unveils and leaves nothing unsaid. “Beautiful” tried to tell an emotional story in a similar way, but too much emphasis was put on the dramatisation of events. Even potentially realistic elements, such as the fight or the loss of a family member, are exaggerated so much that they are hard to be believable anymore.

The risk with long music videos is also to have the viewer focus on the plot so much that the song gets buried by the strength of the pictures. “Beautiful” is a mild and warm mid-tempo ballad, but rather than being enhanced by the video, it almost becomes a soundtrack. Which is unfortunate, given that it’s a very pleasant song carried by the talented vocalists of Wanna One.

Wanna One’s singing and dancing skills are known to be above average and the same can be said about their acting as well. Seongwoo comes from Fantagio, an agency whose main focus are actors and actresses, and Jihoon used to be a child actor — he recently got into Chung-ang University’s acting major without special treatment. Daniel managed not to get outshined by his group-mates but it’s a pity that the other eight members are barely visible throughout the music video.

An unequal distribution wasn’t applied to screentime only, but also to the singing parts of the song. While of course vocalists such as Jaehwan and Seungwoon can be heard distinctly, Jisung and Guanlin couldn’t get more than a few seconds each. Fans of the group have already complained about this issue before, and are currently up in arms against YMC Entertainment. 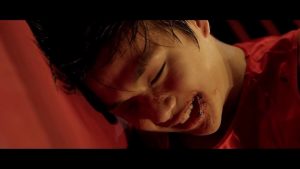 Overall, “Beautiful” is a pleasant song and its music video will surely make Wannable shed more than a few tears. Unfortunately the plot is confusing and overpowers the song. It’s also not clear what kind of message it tried to convey. If this is a story about the importance of loyalty and friendship, there should be some kind of conclusion celebrating Seongwoo and Daniel’s sacrifices. Sadly, the actual ending of the music video, with Daniel apparently defeated and Seongwoo potentially dead, leaves nothing but a bitter taste in the mouth.