KARD's "You In Me": Musically Palatable with a Tinge of Necrophilia 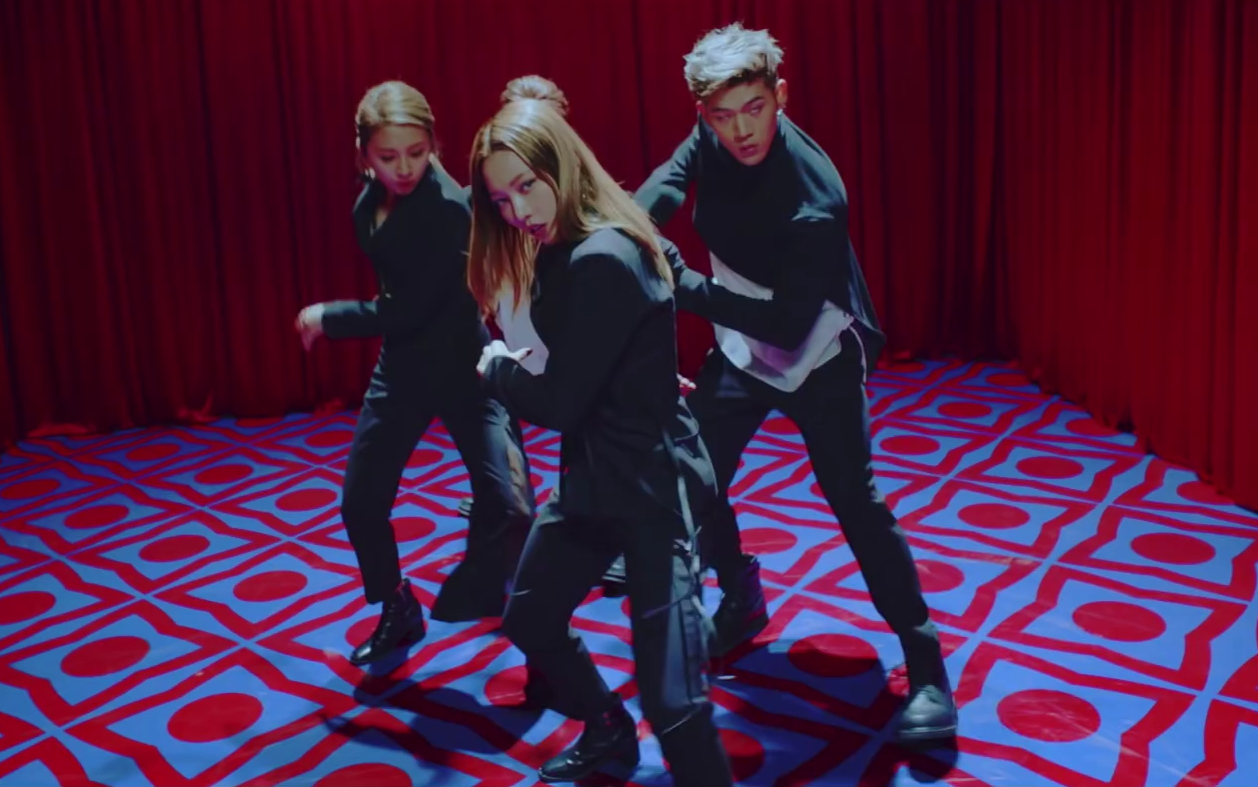 KARD is probably best known for two things: the co-ed nature of the group and their growing international appeal. In October, Mark addressed the success of KARD’s overseas promotions in his concert review of their San Francisco Tour. Even though KARD receives much less attention domestically, their fame — especially in the Western hemisphere — is indubitable. Most of their music is characterised by a similar sound, and many have pointed out the tropical house beats common in their tunes. Their newest track “You In Me” follows such a strain, but thankfully throws in a narrative twist to the familiar approach.

KARD’s advantage is the balance and mirroring made possible with their co-ed group structure. Having two males and two females not only offers a vocal balance, but also a visual one. Evident in the MV for “You In Me,” the group is split into male-female pairs and this division carries into the spatial constructions within the MV.

The MV begins with a tracking shot across two motel rooms, establishing a clear divide between each pair. A certain mirroring is established through such a divide, though at the same time the inconsistencies between each room amplifies the breakdown of relationships conveyed through the song. Donning a suit and black dress respectively, J.Seph and Ji-woo are first shown having a solemn meal in their room. The camera tracks to the adjacent room that is in a mess, with B.M slumped on the ground with a bottle of alcohol in his hand and So-min on the bed, slouched against the bedframe.

The MV continues to trace the interactions between both couples, juxtaposed against each other through the adjacent rooms. The behaviour between J.Seph and Ji-woo is coded in intimacy. However, B.M and So-min wander about the space of their motel room individually, distancing themselves from one another. There is a sense of disconnection in the latter room, but the former is strangely estranging as well. Despite being physically close to each other, J.Seph is unresponsive to the affections of Ji-woo.

The detectable distancing between J.Seph and Ji-woo in their motel room indicate a relationship that is headed for the collapse displayed in the next room. The utter breakdown of the relationship is plain from how isolated from each other B.M and So-min look despite occupying the same space. Ironically enough, interwoven between the shots of each couple is a long-shot capturing the front of the motel rooms, with the bright neon sign “Apego” on its roof. The name of the motel is Spanish for “attachment” or “fondness,” which stands in ironic contrast against the narrative of the MV and the song’s content:

I’m calling out to you
But you don’t answer, I apologize
You are the only one I love love
I can’t let you go
You’re forever in me 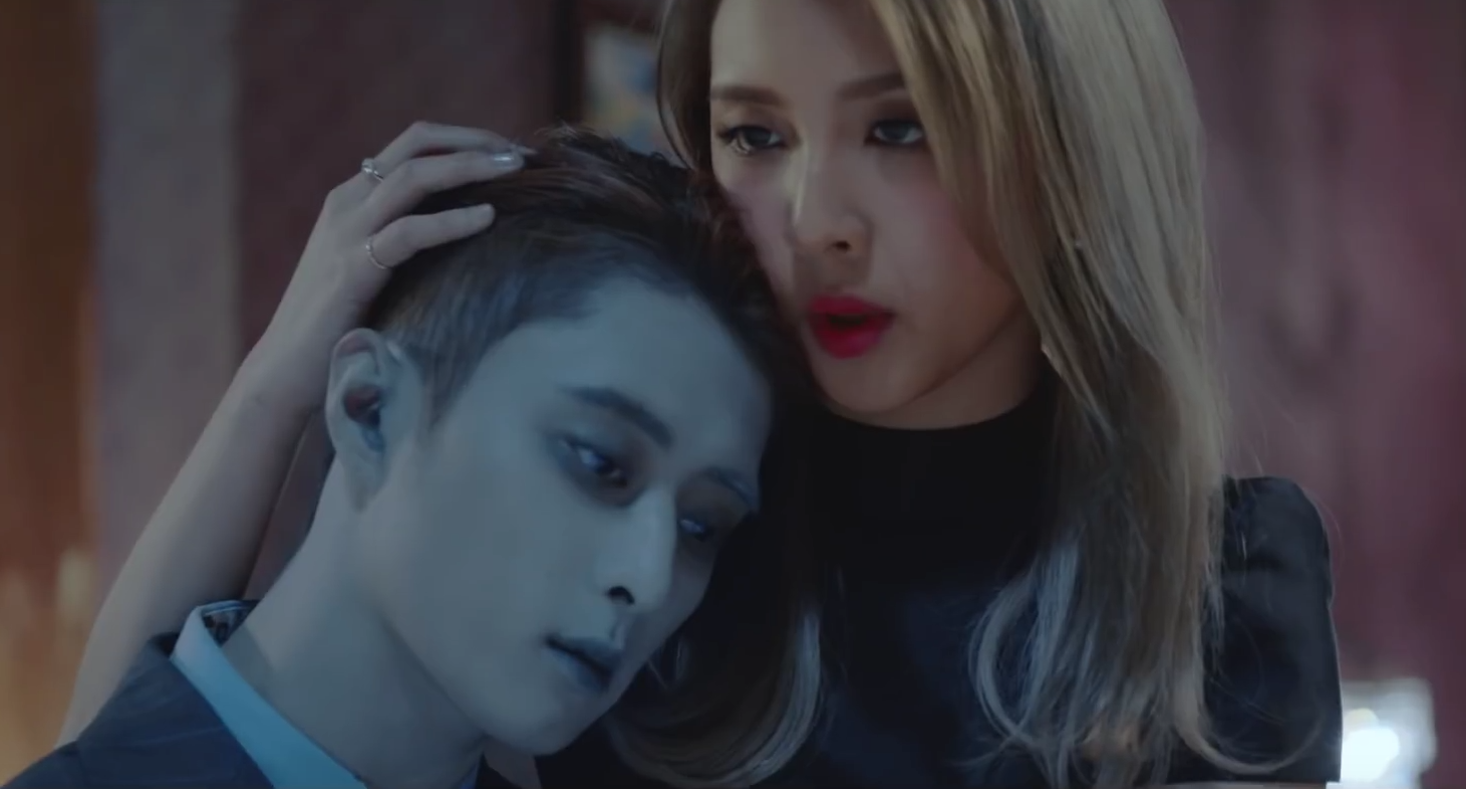 The MV comes off as yet another typical story about a clingy lover, but KARD delivers a dramatic twist that throws off such sweeping judgements. Towards the end of the MV, lightning flashes are seen and the male in each pairing become ghastly white and corpse-like. So-min is thrown into a flurry as she is struck by the reality of her situation. She comes to the realisation that she has been living in denial of her lover’s death. She transits into a maniacal giggling before eventually collapsing on her knees before her dead lover.

On the other hand, Ji-woo caresses her pallid lover, and the MV concludes with her lying beside her dead lover on the bed. The sudden intrusion of necrophilia into the MV’s narrative heightens the obsession tied to romantic relationships. The desire to be loved escalates beyond just a simple yearning for reciprocation: it extends into a perverse desire for possession and companionship. Dealing with darker fantasies openly in this particular MV, KARD is certainly showing a maturity beyond simple dance tunes and party songs.

The visual structuring is also reinforced in KARD’s choreography, with a diamond formation recurring throughout “You In Me.” The MV backdrop subtly echoes their dance. The floor design is constructed of diamond shapes and of course, the chandelier in the room contributes to the geometrical emphasis of the MV. These nuanced choices might seem insignificant, but they reflect the elaborate aesthetic considerations put into the MV production.

Speaking of dance, another appealing aspect of the MV is the fluid transitions between the dance shots. Dance is arguably one of KARD’s stronger suits, and the camera work in “You In Me” goes a long way to accentuate this. The powerful moves of the group translates well onscreen as the camera zooms following the point moves of the group’s dance. Instead of sticking to a static medium shot to film the group’s dancing like in many other K-pop MVs, the attention paid to synchronising camerawork and choreography adds a layer of dynamism.

Turning to the track itself, “You In Me” mixes muted EDM beats in its chorus with a simpler and rawer melody throughout the rest of the song. Even though they do not deviate significantly from the musical style of their earlier singles, KARD incorporates a melancholic dimension with this particular tune. Compared against songs like “Hola Hola,” or “Rumour,” they have deemphasised the house music style just a tinge. The more solemn and heavier melody suits the darker themes dominating this MV. Putting both together, the MV is a well-constructed complement to the track itself.

“You In Me” demonstrates KARD’s strength in being a co-ed group, and also the group’s maturity to undertake more serious themes. Having an equal male and female count, they can easily establish binaries to be used for mirroring or juxtapositions. The MV for “You In Me” is aesthetically pleasing to watch, alluring even, especially with the powerful dance moves that would translate well onstage for live performances. However, it is hard to ignore the fact that the group has yet to demonstrate their ability to tackle a broader range of music styles. 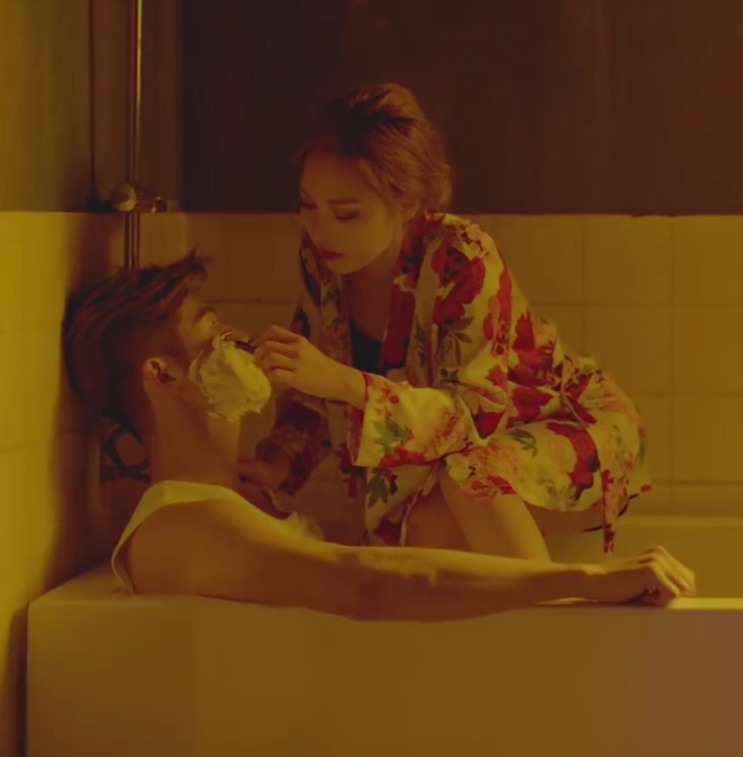 As of present, KARD has yet to accomplish more than what they are familiar with, at least musically speaking. Perhaps it is the growing emphasis for K-pop idols to be seen as well-rounded musicians in addition to being mere performers, but there remains a nagging feeling that KARD is just slightly off-the-mark. They are certainly unique, but that novelty wears off quickly upon realising thier performances tend to roll with the trends rather than pushing for newer fronts musically or otherwise.