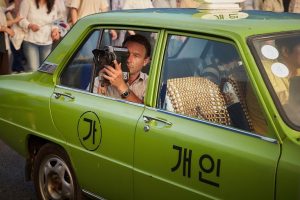 As South Korea’s entry for the 90th Academy Awards, A Taxi Driver embodies the aspirations of the industry to attain recognition for its brave venture into creating real cinema. Starring Song Kang-ho as Mr.Kim and Thomas Kretschmann as Jürgen Hinzpeter, A Taxi Driver investigates the tale of a German reporter covering the Gwangju Uprising of 1980 and his Korean taxi driver who helps him get to the city, which has been otherwise cut off. It is based on real life events marred by several artistic liberties. The movie exalts the ‘unsung hero’ who makes it possible for the shroud of falsehood to be lifted.

A Taxi Driver revolves around the inner conflicts Mr. Kim (whose full name is never revealed) faces while driving his foreign customer to Gwangju for a large sum of money. He is too caught up in his financial problems to pay heed to his daughter, let alone the country. But his nationalism is awakened by the desolate state of the citizens of Gwangju city and he is spurred into action to help the reporter “show the world that the people of Gwangju are not alone”. Amidst this, he is also required to introspect on his life choices and their effect on his daughter, who he has brought up as a single father.

The Gwangju Uprising, or ‘massacre’ as some choose to call it, was a call for democracy and a fight led by university students against the military dictator Chun Doo-hwan.  President Park Chung-hee was assassinated in 1979 and martial law was declared across the country by Chun. His coup destroyed any semblance of freedom the people previously had and all forums of public thought such as the parliament and universities were shut down. The military was given unhindered powers and the civil rebellion was contained through shooting into crowds and other atrocities. Later, Chun was charged of sedition and deposed but not without much suffering that A Taxi Driver attempts to memorialize. 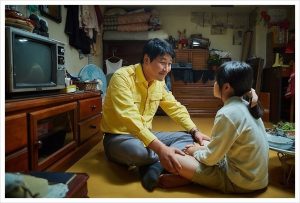 The subtle nuances of the taxi driver’s persona and the evolution they undergo, through his interactions with the supporting cast, have been expressed with finesse by Director Jang Hoon. The ancillary characters (who are purely fictional) give the taxi driver a background and context for his actions. His daughter (played by Yoo Eun-mi) gives Mr. Kim incredible depth and makes him less materialistic and more humane. A couple of scenes show the audience that he is not as forgetful as he gives out to be when he buys the right sized shoes for his daughter despite being under immense confusion.

Mr. Kim’s desire to contribute to the rebellion notwithstanding the responsibilities that weigh him down comes through in his demeanor around Jae-sik (Ryu Jyun-yeol), the innocent university student who is determined to see through the protest until the very end. It instills in him the will to continue with his bizarre foray into the politics of Gwangju. Their most memorable sequence is their peaceful singing before they are separated. Ryu Jyun-yeol steals the spotlight with his impeccable portrayal of the youth that was actually leading the uprising. He manages to personify the hesitations and difficulties that the citizens of Gwangju were going through with ease. Mr. Kim is also much taken in by Hwang Tae-sool (Yoo Hae-jin), a local Gwangju taxi driver, and his quirk of ‘driving the customer wherever he wants to go’. This tip has been spectacularly used to disguise a larger understanding of fulfilling one’s duty. 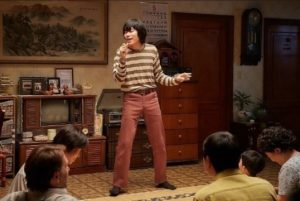 An implicit propagation of democratization, the desire for freedom, is the basic theme throughout the film and subsequent strands within the script follow it, be it in the shots of banners fluttering in deserted streets or through conversations of Mr. Kim with local ahjummas. The suppression of rebellion has been given much importance through drawn out scenes depicting the brutality of the military which includes firing at unarmed crowds indiscriminately. Mr. Hinzpeter follows his journalistic vows to report on the truth. The power of the collective in contrast to Mr. Hinzepeter’s individual strength can be seen in a scene of a procession of taxis that form a barricade to the firing squad, allowing the injured to be taken to the hospital.

The censorship of media is the second most recurrent theme. As in every dictatorship, journalism is heavily red taped and no actual reporting is allowed within the city of Gwangju. Foreign reporters are allowed some respite but Hinzpeter is also hunted down by the military, but he does not succumb to the imminent threat to his life. Jae-sik ends up being captured just to retrieve the tapes on which the reality had been shot. Mr. Kim’s evolution in the movie is an epic journey of him becoming a person who will sacrifice for the good. His refusals to accept money in the latter half of the film, his choice to turn back to Gwangju on eating a native Jeolla rice cake, and his willingness to stay in Gwangju for another night despite his daughter being alone, are all signs of positive change that his brush with the uprising caused.

What makes the film is Song Kang-ho’s fine acting, which comes through in his ability to breathe life into an otherwise dull Kim only through facial expressions. His naiveté is not overdone and he seems to continuously be in control of the character. The supporting cast is magnificent and Ryu Jun-yeol’s Jae-sik is everyone’s favorite man. The background score was also extremely appropriate and cohesive, adding to the cinematic highs of the film. 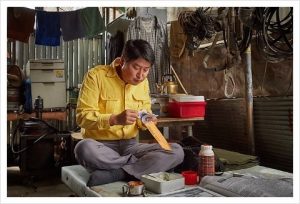 In spite of several positives, the film missed certain elements that I was looking for, such as the lack of camaraderie between the taxi driver and Hinzpeter, which gave the movie a disjointed feel. Kretschmann’s acting is dry and uninspiring which is off putting in a film with so much emotional tension. Expectations while watching the film were high but it fell short despite a stellar performance by Song and the supporting cast. But it is a worthwhile watch that makes one believe that an individual can also lead to monumental change just through the power of will.