A.C.E's "Callin" Turns To The Bible For Inspiration

There are two ways of watching K-pop videos. One is to analyse each frame, shot by shot, and examine all the possible symbolism and hidden messages. The other way is to simply enjoy the mood created by the music combined with the skilfully shot visuals. In the case of A.C.E’s release, “Callin”, there is material enough to examine each frame for references to philosophy and religion, but it’s also cool enough to be appreciated without extensive legwork.

“Callin” is only the second single released by A.C.E, who drew attention during their debut promotions with their sound, which draws from hard-style influences, and by dancing in tiny shorts. “Callin” builds on the foundation of their first release by maintaining a hard-hitting production with synth-laden, atmospheric verses segueing into a pounding chorus. The song has a brisk pace, and the MV keeps up the energy with a flood of rapidly changing images.

“Callin” opens with a quick shot of Jason walking outside holding a flare, which is followed by rapid cuts between him sleeping, a cross projected over different members, a burning rose, a hand writing Psalm 71:21, and finally, an eye opening. Jason appears to be the protagonist with his awakening bookending the MV. 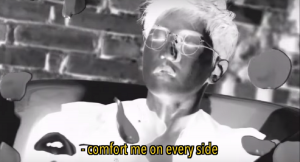 This initial flurry of imagery is heavy on religious symbolism. Crosses are an obvious and consistently used Christian hallmark. Roses were an icon of venerated pre-Christianity as a symbol of the goddess Venus that was transferred to the Virgin Mary. The flower became so strongly identified with Mary that the form of prayer, the rosary, was named in its honour. Flames are a symbol of the Holy Spirit in the New Testament and in the Old Testament because God spoke to Moses through a burning bush. Roses and fire are both common symbols, not exclusive to any religion, but their juxtaposition with crosses and the Bible verse implies Christianity is the source.

The verse from Psalm 71:21 that is used repeatedly throughout the MV is “thou shalt increase my greatness and comfort me on every side”. The psalm in its entirety speaks about running to God as a source of refuge during troubling times.

The message of the song lyrically can be interpreted through a religious lens as well. The lyrics repeatedly refer to a voice calling for the protagonist. Hearing the ‘voice of God’ is a mainstay of Old Testament mythos and is often used to great effect in traditional hymns.

The protagonist struggles with confusion and anxiety to answer the call to succeed, as is outlined in the psalm. The protagonist, presented with faith, responds to the challenge and is presumably rewarded with victory. 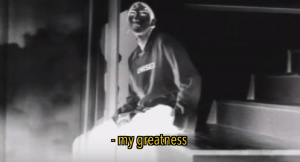 The conflict in the MV is whether any of these chaotic thoughts have a basis in reality. Jason is asleep when the events of the MV take place and is shown waking up at its conclusion. His eye is shown with a cross projected on the pupil, but at the end, it has no filter. We are brought out of his character’s inner life, and he is left to contend with the world. The MV presents the song as a crisis of faith rather than love, in which religion encourages growth.

Without paying attention to the symbolic elements of the song, the camera work and effects hit on many ’80s throwback trends. One of the most effective camera techniques used in the video is the way the shots move harmoniously with the choreography to emphasise the rhythmic actions of the dance. Crash zoom shots are used with visual distortion during the end of the first chorus and it intensifies the energy of the already urgent drop.

The use of VHS filters, projecting the sky onto the members’ bodies, and selective colour inversion combined with the rapid cuts between scenes makes for dynamic viewing. There are a variety of different techniques used at a bewildering pace. If you’d like you could sit back and let the visuals of the MV bombard you with nostalgia.

There are many ways of enjoying A.C.E’s new MV. One is to allow it to overwhelm you with the energy of the dancing, dynamism of the camerawork, and frequency of the filter changes. When enjoyed in that way, it’s unrelentingly vigorous. Another way to view it is as a symbolically intricate exploration of religious imagery and the Christian faith. Either way, A.C.E is making strong creative choices for a rookie group and executing them with aplomb.