Eunkwang Sings A Familiar Song With 'One Day' 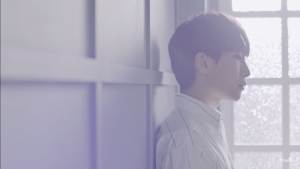 Seo Eunkwang is the seventh and final member of BtoB to release a solo single and b-side for the ‘Piece of BtoB’ project. Each member has shown their individual music styles in their releases and Eunkwang is no different. His double release of “One Day” and “Back Then” are both ballads showing off his impressive singing technique. Eunkwang’s voice is at the forefront of “One Day” and while it is impressive there’s something missing from the total package.

The MV and song are both unabashedly sentimental and traditional in their romanticism. The song, arranged according to a traditional ballad structure, tells the story of a protagonist who wants his love to forget him. It fits very neatly into the adult contemporary genre of music your mother plays and sings along to with her eyes closed. The ’70s fuzz-rock balladry is elevated by the quality of Eunkwang’s voice and delivery. He approaches the potential melodrama with a seriousness that skirts the theatrical edge but doesn’t become overblown.

The MV uses a non-linear narrative to show a couple, played by models Kim Kin-kyung and Lee Ho-yeon, falling in love and finally breaking up. The love story is a standard example of the Florence Nightengale effect. Ho-yeon is hit by a reckless driver while legally walking across the street on a pedestrian crossing. We never discover what legal recourse he takes against the driver who was clearly in the wrong. During his recovery, Ho-yeon falls in love with his beautiful doctor, Kin-kyung. It’s suggested we should find this scenario romantic rather than a clear violation of the Hippocratic oath. 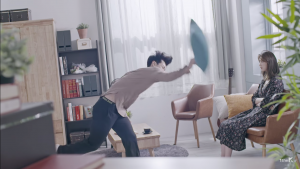 The reason for their break-up in the MV and the song is left unexplained. We are shown Ho-yeon throwing a pillow and grabbing Kin-kyung’s shoulder aggressively but no further context is supplied. The story might have been more interesting with a plot twist like Kim-kyung was the reckless driver who injured him in the opening scene but no such luck.

The use of flashbacks of the beautiful moments of their relationships within their break-up was well shot but the song and MV suffer from a lack of innovation. The romantic elements are familiar and competently executed but because it is so conventional the tiny changes to the established format fail to make it particularly compelling. The final resolution of the narrative is so generic it leaves hardly any emotional impact and is ultimately unsatisfying. 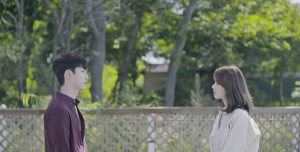 This lack of a variation from the orthodoxy of romance is also present in the construction of the song. The instrumentation is dominated by an acoustic guitar and is occasionally intercepted by an electric guitar that should be given more space to deliver maximum cheesiness. There are enough giant high notes for you to satisfyingly screech along with while getting over your latest heartbreak but the schmaltz is restrained.

Where the song greatly deviates from romantic norms is in the lyrical content. Instead of encouraging unhealthy obsessions or claiming to be unable to go on without the romantic interest, the song wishes happiness for the person.

Forget about parting and live again.
Just like when you first met me
If all the words you love are forgotten
I understand what you pretend you do not know. 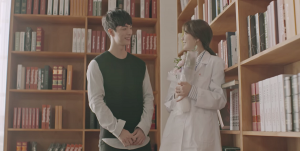 Perhaps it is in the affirming lyrics that the song could have been more adapted to the typical tropes of overwrought emotion to fully commit to the format. Although the maturity of the content is admirable, it’s not as enjoyable as a guilty pleasure ballad should be, complete with hyperbolic sensitivity. You wouldn’t leave a voicemail message of you drunkenly crying and singing “One Day” to your ex-lover but if there were a little less moderation, you probably could.

The song and MV lie firmly in the middle of the road when it comes to quality purely because of a lack of creativity. The cliches are too conspicuous to be ignored and no attempt is made to interpret them in an interesting manner. In terms of narrative, things are left too vague to be especially effective in making a connection with the characters of the video. The song allows Eunkwang to display his technique in singing and performance but he doesn’t have a lot with which to work. It’s not poorly made by any stretch but ultimately the decision to hold back makes “One Day” forgettable.