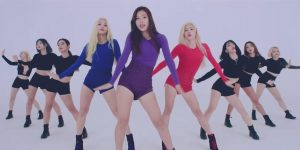 Loona and BlockBerry Creative are in the midst of their new revealing project for the members of Loona. To do this, they are releasing a new female member of the group nearly every month. After they reveal three or four members, they release a sub-unit song for the last batch of girls. The first was Loona 1/3 with “Love&Live.” You can catch up with the year-to-date Loona universe with my earlier article that ended with Kim Lip and Loona 1/3. Now, just six months later, we have Loona Odd Eye Circle consisting of Kim Lip, JinSoul, and Choerry. All three members have released their own songs – “Eclipse,” “Singing in the Rain,” and “Love Cherry Motion,” respectively — and now the three members have formed one of the most hyped nugu sub-unit releases of 2017. Along with the album Mix and Match, the Loona Odd Eye Circle crew released a stunning visual video for the lead single, “Girl Front.”

Blockberry Creative has gifted fans with striking music and visuals through the past year, and it’s capped off with the new sub-unit release. To totally understand the goals of the sub-unit, it’s important to know where each of the members come from. Kim Lip released her Ariana Grande-esque single, “Eclipse,” which was followed by the EDM-inspired “Singing in the Rain” by JinSoul. Lastly, Choerry released “Love Cherry Motion” which was an irresistibly pleasant combination of the last two solo songs with more pleasant hooks and melodies. Now, “Girl Front” combines elements of all the last three singles and blows them away. Musically and visually, the video provides a perfect remembrance of the beauty, heat, and color of the summer before it ends.

The video was mostly shot in Los Angeles and many of the scenes in the video show the never-ending buildings in the backdrop of the girls running through the outskirts of the city. To complete the look, the girls are in their Los Angeles-best with the cut-off jean shorts and crop tops. While there isn’t some kind of obvious meaning to the video, it seems to take the girls through different areas of Los Angeles in hopes to find the ecilpse that the group has been known for. On their adventure, they travel through back alleys and even some spooky, abandoned carnival. The eclipse that ultimately appears before the girls go to the desert is pronounced by the three colors of the sub-unit. So far, every Loona member has had a color. Kim Lip is red, Jinsoul is blue, and Choerry is purple.

Perhaps the most fantastic thing that BlockBerry Creative has done is use limited and eroded landscapes to create their ultimate visual effects. Some of the cinematography used in their past videos is stunning. This video is no exception. The way the camera zooms and moves during Kim Lip’s running shots are something else. There’s even a really cool shot of Kim Lip “shooting” a gun and the camera recoils back like it’s the bullet. The editing also works so well with the song. The song itself transitions magically between the different parts, and the video picks up on that and moves through the scenes just as smoothly — from Kim Lip running, to Choerry in front of the pink wall, to the rewind of JinSoul in different settings as the male voice loops. 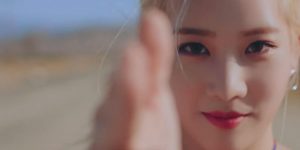 Outfit-wise, BlockBerry used the opportunity to rebrand the girls. Through this video, it’s hard to notice the obvious use of their color, though when it pops up, it’s beautiful. All their colors match their personal style so well. For example, towards the end of the video when it’s just JinSoul standing in front of a blue screen, she stands out in front of it with her blonde hair so perfectly. Same with Kim Lip and Choerry. Choerry’s purple is so dreamy, and as a contrast to Kim Lip and JinSoul, it looks fantastic when they team up in their colored outfits.

“Girl Front” was teased as a song to expand the universe from Choerry’s release, but instead, the sub-unit stuck to some of their usual tropes. The most noticeable is the white backdrop that is played with through some of the other releases — mostly for dancing scenes. On top of this, the girls use some vacant and wasted areas of the Californian city, much like the hollow and expansive backdrop for “Eclipse.” It’s not the most creative use of the scenery around the city — and it wasn’t exactly what was originally teased, which was most disheartening for me. I was really looking forward to seeing the girls create and craft the three-moon universe that was shown as a utopia.

As someone who’s been intensely following Loona and the teasers up to this point, I’m a little underwhelmed. I think they could have done a little more visually. Saying that, I think perhaps my expectations were a little too high for a group that technically hasn’t debuted yet. Though that could also mean BlockBerry Creative has done such a good job so far that anything other than perfection is a little underwhelming. Though, in conclusion, “Girl Front” is a notch above many of the other summer releases so far. I haven’t been so enthralled in a music video since “Red Summer” by Red Velvet. In fact, this might be “Red Summer” lite. It has the twists and turns of a Red Velvet track and there is nothing that a new fan wouldn’t be able to enjoy. Though the peaks of the Loona Odd Eye Circle era are done, it’s up to BlockBerry Creative to try and top this almost perfect sub-unit.