GOT7 Continues to Confuse with "Hard Carry" 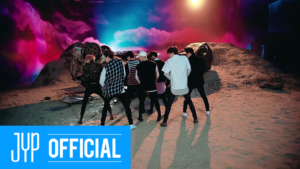 Roughly six months after the release of Flight Log: Departure, the boys of GOT7 are back with the second installation of the series, Flight Log: Turbulence; and headlining this latest studio album is the title track, “Hard Carry”. As the follow-up to Flight Log: Departure, it is no surprise that “Hard Carry” follows the plot of its predecessor, “Fly”; and as the second part to a series, one would hope that “Hard Carry” would shed light on what exactly is going on. Unfortunately, rather than clearing up the confusion, “Hard Carry” serves no purpose in helping the audience understand the narrative at all.

We remember the general plot of Flight Log: Departure and “Fly”, where the members of GOT7 are on a road trip, and suddenly they all, mysteriously, start to fly — quite literally. And meanwhile, throughout the confusion, Junior seems to be invisible to them all. He seems to be living in an alternative universe where he might, or might not, be dying (or dead). All the members, apart from Junior, appear to be having the time of their lives, but Junior, alone, experiences the exact opposite emotions such as fear and loneliness.

A similarly confusing situation occurs in the trailer for Flight Log: Turbulence. The trailer starts off with a scene of the members goofing off in a first class plane cabin while Junior remains in his seat, watching them contentedly. Soon enough, though, the plane starts experiencing some extremely bad turbulence, and the seat belt signs get turned on. Worried, Junior makes to unbuckle his own seat belt in a bid to tell his friends to stop fooling around and to put on their own seat belts.

This is where it all starts getting strange. As soon as Junior reaches for his seat belt, the flight attendant comes around and tells him not to unbuckle himself, and to remain seated. At this point, the turbulence is terrible — so bad that the lights are flashing and the oxygen masks have been released. The trailer gets even weirder here, because while Junior is terrified that the plane is about to crash, his friends continue playing as if nothing is happening, and the flight attendant is attending only to Junior, forcing the oxygen mask down onto Junior’s nose and mouth. This chaos is interspersed with scenes we had previously seen in Flight Log: Departure where the members are flying, and there is also a shot of Junior trapped in a water tank.

The trailer then ends with a scene of the plane wreck, and paramedics are putting an oxygen mask on Junior. As he regains consciousness, Junior removes the oxygen mask, and that’s when he sees a camcorder on the floor — the one that was used during their road-trip (in Flight Log: Departure), playing out scenes of GOT7 having fun.

It is at this scene of the disaster that “Hard Carry” picks up the narrative. The music video itself has the members dancing among the wreckage. However, there are scenes of JB and Young-jae singing against a backdrop of floating Christmas trees, which are very odd and random.

There are also scenes (again) that are redolent of ideas in “Fly”, and in the trailer for Flight Log:Departure, such as Young-jae with a caged bird and Junior being pulled upwards by an unknown force. Only this time, when Junior floats upwards, he is pulled down by his members. While this might simply be a choreography point, it seems to tie in with a scene that comes up towards the end of the music video, where Junior is saved from his entrapment in the water tank by Young-jae, who breaks the tank with an axe.

Freed from the tank, Junior sinks into an ocean, and then all the members of GOT7 are seen diving into the ocean and pulling Junior up to the surface with them. We then cut to a final dance scene, again at the wreckage. But this time, the members are drenched, as if they have just emerged from the water. This feels like a possible step in the story, but I’m not sure in which direction. 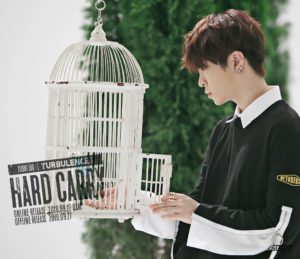 So I’m afraid I’m going to have to say that I do not understand this music video at all. There is little coherency between the scenes, and as much as it is clearly continuing the narrative from the previous album, I have no clue as to what is going on.

But just like “Fly”, it is possible to approach this music video as a stand-alone track, and ignore all the random scenes that do not make much sense. If we are to watch the video with that mindset, “Hard Carry” is a rather enjoyable video that focuses mainly on the choreography.

GOT7 goes really hard with the choreography for this track; it matches perfectly with the song, which is heavy on the electronic front and features a very catchy chorus. It also shows GOT7’s growth since their debut; they have come a long way from simply having girls love their swagger. Their dance moves are sharp, powerful, and synchronized, and their vocals are also a lot more stable, each member having found his place in the team.

The lyrics to the song are also rather interesting. The term “Hard Carry” is a commonly used term in the gaming circle, in Multiplayer Online Battle Arena (MOBA) games such as League of Legends (LOL) and Defence of the Ancients (DOTA), amongst various others. In general, hard carries are characters that are generally weak at the beginning, but through the help of their team, they gain experience and/or items that help them become extremely strong, and are thereafter able to “carry” the team to victory. As such, hard carries are also often the ones who get the most kills and are, therefore, usually in the spotlight than other players that play supporting roles, even if MOBA games rely heavily on team effort. It is in this context that the lyrics to GOT7’s song can be read.

When I fight, the game is over

I get everything I want

I know how to derail a situation

I do what I need to do today again, I hard carry 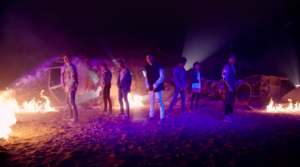 Simply put, “Hard Carry” is GOT7 bragging about their capabilities and their prowess, and more importantly, their growth in the K-pop industry from rookies to the stars that they are now.  The confidence relayed in the lyrics is rather befitting of the intense musical sound and choreography, and accompanied by a solid arrangement, the song is actually a very strong title track. It could have brought GOT7 to new heights — if not for the fact that its impact has been impeded by a lousy narrative that just feels forced. I thoroughly enjoyed the song as well as most of the music video; I just wish JYP Entertainment would abandon this whole concept — or at least try and make it feel less disjointed and jumbled.

So here’s hoping that there will be a third installation to this Flight Log series which will hopefully — miraculously — be able to provide an explanation to all this confusion. While story lines and hidden meanings are interesting and engaging when done well, Flight Log, so far, has been the epitome of the exact opposite.