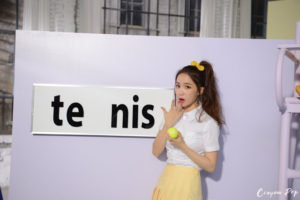 In hopes of recapturing some of the magic in a bottle that earned them their rise to fame in “Bar Bar Bar,” Crayon Pop returns with “Doo Doom Chit,” a catchy song with an equally infectious dance hook. Since the group unexpectedly jumped up the charts and into our hearts three years ago, it’s fair to say that they’ve lost some of that momentum despite having made several quality comebacks.

“Doo Doom Chit” follows the formula of what we’ve come to expect from Crayon Pop, that of oddly cute visuals, a creatively inspired concept, and a simple dance hook packaged with an infectious beat and an earworm hook. It’s something they’ve been doing since their debut and have consistently improved upon with every comeback.

Whether or not one enjoys the Crayon Pop brand, it’s hard to deny the impact they’ve had on the industry. Instead of being trendy and conforming to what is currently popular, they’re one of the few groups that have found success without having to compromise their conceptual integrity all that much. Combining two distinctly K-pop features, the group has capitalized on being very upbeat and likeable. As a result, it’s difficult to not be drawn to them because a lot of what they do draws from the very foundation of what defines the genre. 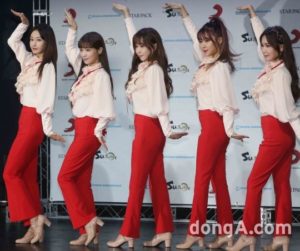 One of Crayon Pop’s defining features is the dance hook. Wonder Girls introduced the term when “Tell Me” initiated one of the very first dance crazes, yet very few people could actually mimic the dance because it wasn’t the easiest thing to do. That changed when Wonder Girls came out with “Nobody” which included a dance hook that most people could pick up fairly easily and complements the hook of the song. T-ara took it a step further by amping up the earworm factor and fusing it with electronic dance music in “Bo Peep Bo Peep.”

The formula has been done many times over with slight variations but the next big game-changer didn’t come until Crayon Pop’s “Bar Bar Bar.” Baffling in its utter simplicity and poetic execution, “Bar Bar Bar” represents the purest version of the dance hook in that the stripped down production forces the viewer to focus solely on the dance without the gloss that comes with a high value production getting in the way.

It’s the dance hook formula combined with their second defining aspect, the quirky concept, that sets Crayon Pop apart. Within the cute-sexy dichotomy of girl groups (and also applicable to male groups), there are sub-categories which fall under each umbrella. 2NE1 introduced the bad girl concept which had the potential to be a third party candidate in what is conventionally a dual party system before it was eventually adopted under the sexy camp. Likewise, Orange Caramel introduced a hyper form of cute which can be labelled as ‘sugary,’ but the true crux of the concept wasn’t exploited until “Lipstick” revealed that people are able to tolerate the saccharine better when it’s combined with humor.

Crayon Pop skillfully mixed cute with humorous and gave birth to the quirky concept where it’s excusable to be overly cute as long as the concept doesn’t take itself too seriously. That is, being quirky comes with a sense of snarky subversion that is oddly comical and at the same time satirical. Few groups can pull this off successfully, but that hasn’t stopped them from trying.

“Doo Doom Chit” is an excellent example of the Crayon Pop brand at work. The beat, the hook, and the dance are all what we’ve come to expect. With a beat in the introduction that sounds like it was pulled from Psy’s “Daddy,” the addictively jazzy saxophone kicks in at the beginning and hits at every chorus. We also get a glimpse of the dance hook and how it fits in with the song’s chorus and hook right at the start. Having the chorus come right after the intro ensures that there is enough repetition of the earworm hook throughout the song for this to stick in our head for days and days.

The dance hook is probably their most memorable since “Bar Bar Bar” or “Dancing Queen.” In fact, the MV begins with Soyul teaching the rest of the members how to do it via blackboard and chalk, and apparently it involves imitating a cat who is also seen coming and going while playing a saxophone throughout the video.

The MV is basically a dance video with a lot of window dressing as we see many cuts of the members in various backdrops and dealing with the cat who is out to troll them. Other than that, the bread and butter of this MV and the promotion is the dance hook which we will likely see a lot of in the coming weeks.

While this is definitely the most conventional MV they’ve made with probably the least aggressive concept, I’m glad that the members are actually styled normally for a change instead of being dressed up to look like Power Rangers, ahjummas, or the many odd outfits they had on before people started paying attention. I’m not particularly fond of the cat because it’s being used as the main source of humor when the comedy should come from the members themselves. The dance alone would have been sufficient in bringing out the quirkiness without having to rely on the cat as a prop. I can’t quite pinpoint the origins of this dancing cat but it has something to do with this text-based image and perhaps with a slight reference to this weird fanmade MV of animated cats dancing to “Bar Bar Bar.”

Overall, I’m very satisfied with the song and dance; yet, I wish the concept and MV could have taken more artistic liberties. It seems like Crayon Pop is moving towards being a more conventional group, which I’m fine with as long as they continue to put out catchy releases and stick to the quirkiness that made them who they are.

Readers, what do you think of the new Crayon Pop?