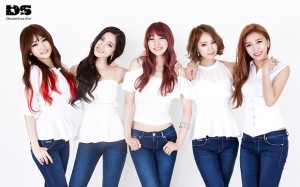 The final month of fall was another great month for releases! In this segment, we’ll look at some of the artists who might have escaped your attention amidst all of the comebacks. In November, there definitely was a shift towards more somber songs, but there were also a few tracks clinging to the upbeat and colorful memories of summer. Here are some of my favorites!

First up is a gentle autumn love song by Younha. Akdong Musician’s Lee Chan-hyuk composed, produced, and also wrote lyrics for this track. Even though it’s about moving on after a breakup, the song is not exactly sad. It has more of a nostalgic feeling to it, and the singer looks back fondly on her past relationship.

The leaves, they fall and the street is drenched by the wind
I’m thinking about you
Ok it’s not bad, not terribly bad
When I stand on this street, I can still see you

The lyrics describe how walking down the street brings back memories. After taking a trip down memory lane, she decides to move on for good.

Now it becomes more natural to be a stranger,
Yes, goodbye. I think about you for the last time on this road with falling leaves.

This video is straightforward and a bit sadder than the song itself. The actress walks to her date on a crisp fall day and different spots remind her of her ex-boyfriend. We see both the ups and downs in their relationship, and even the small candies in her pocket bring back memories. At the end, the idea of dating someone new is too overwhelming, and she leaves. The video was nice, but it would have been better if the memories were spaced out more instead of the majority being at the end.

Next is indie rock band The Koxx! The song deals with the shock of realizing a relationship is really over. The singer can only focus on his girlfriend’s voice, smile, and their past memories. From the lyrics, it’s obvious that the decision to break up is not mutual; he is still very much in love with his girlfriend. But for some reason, she wants to, or has to, leave.

I’m still blank in that place,
I’m locked on the thoughts of that day
We cry; then the tears stop
I take a breath afterwards
Laughter is behind us,
This is what they call the end

The video is simple but good. After so many videos of just singers, it’s nice to see people actually playing instruments and making their own music. The band members are in one dark room and a distraught girl is in the other. They are connected to each other through TVs, videos, and musical instruments. The videos are focused on one piece of the whole room, which is like how in our memories only certain parts of the whole are strongly remembered. There are also a lot of TVs with static, perhaps indicating erased or forgotten memories.

Gavy NJ celebrates their ten year anniversary with the jazzy “Hello.” The trio sings about breaking up and focus on the actual moment of saying goodbye. They do find some comfort in the fact that lots of people have gone through the same thing and have moved on. Even though the end was near, they still find it difficult to actually say goodbye since it seems so final.

Be well, hello, be happy hello. Love is all the same
My days will no longer be filled with you
I’m sorry for being a mess, you must be tired of me
You can turn your back now

Don’t cry, hello, it’s ok, hello, love is all the same
Are you still stuck in the dreamy times?
I talk too much, don’t I? You must be tired of me.
I’ll say goodbye now.

The music video looks really sharp in black and white, with pops of red. They incorporate the microphone stands a little bit into their choreography, and I wish they would have taken that further. It would have made their performance, and music video, more engaging.

For our last two songs, let’s try something more upbeat! Tahiti wants to skip all of the dating games and schemes in their new song. They’re even more impatient because their crush is obviously a nice guy who makes their hearts flutter. They specifically reference “push-pull” (밀당) which is basically playing hard to get. For example, someone you’re interested in might suddenly stop contacting you (push) so you have to chase them down to show your sincerity (pull). They also talk about skipping over pretending to be someone you’re not. Another cute concept they talk about is blood types which, like astrological signs in the US, supposedly affect your personality.

Hi, hi my name is Ari. If you get to know me, I’m gentle.
My blood type is playful B, I’m the type that doesn’t endure well.
Time time, don’t joke. I get hurt very easily.
Stop beating around the bush and skip!

The music video is also fun to watch, and the girls genuinely seem to be enjoying themselves. The video takes the lyrics to a different level and imply skipping forward to the physical parts of a relationship. The guys start out in the same costume, showing how they are hiding their true personalities beneath a cute bear face. It’s only later on that we see them take off parts of the costume, showing that they are actually different underneath the innocent mask. It’s a song and video that is cute and playful without venturing into lolita territory.

5. myB (마이비), “Again, Again” (또또)
Last is myB who debuted this year with “My Oh My.” The bright colors and cheerful tone of “Again, Again” might just be enough to make you forget those chilly December mornings. The girls sing about only wanting to see and hear their crush. It’s a carefree and innocent song that shows the oh-so-satisfying suffering that comes from liking someone.

When you say my name on the telephone,
When I’m walking along among the couples,
Alone, I think about you and without realizing it, I smile

The video is uplifting with all of the bright colors and fun choreography. It was nice to see a girl group wearing flat shoes instead of heels so that they could do more energetic moves. Not wearing heels definitely opens up new ways to dance, and there is a lot of spinning and carefree jumping. I also appreciated that they all have healthy-looking blonde hair instead of that weird orange color that some unfortunate idols have sported.

We’re almost at the end of the year! I hope that you enjoyed my picks for November. Do you have any favorites of your own?