Akdong Musician Explore How To "Give Love" 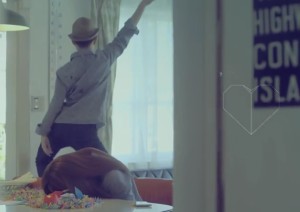 Akdong Musician (AKMU) have released a breezy spring MV for “Give Love,” their third title track off impressive first album PLAY, the first two title tracks being “200%” and “Melted.” “Give Love” picks up where “200%” left off, with Soo-hyun yearning to attract the attention of an older boy (model Nam Joo-hyuk) who seems to be in love with another girl (model Lee Ha-eun).

Continuing the narrative through multiple MVs is an intelligent and elegant move. It gives twice the time for story and personality to bloom, rather than rushing to cram everything into only one MV. In AkMu’s case, it allows Chan-hyuk and Soo-hyun to show different sides of themselves within the same story’s development.

In order to get close to her crush, Soo-hyun tries to befriend the girl who is always with him, which is a limited success. Although she is allowed to tag along with them as they go about their lives, Soo-hyun is often framed as the third wheel. They ask her to take a picture of them on her phones, and she reluctantly obliges. The trio take a trip to the zoo, and the pair giggle without her. Visually, she is often pushed to the side of the frame, and her ache for connection is palpable. 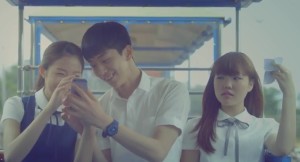 Soo-hyun’s acting is impressively realistic, in the vein of an energetic first crush; she giggles and turns her head away from the object of her affection even as she constantly craves his attention, and when he’s not looking, her eyes are always fixed upon his face.

Beginning with a dotted line reading “Tear Here,” the geometric origami patterns and arithmetic overlain onto the screen with thin white lines emphasizes the mathematical side of giving love and getting love. Soo-hyun is labeled with the letter “C,” never “A” or “B.” The block letters “GIVE LOVE” appear wherever she goes, as if her life is consumed and filled with the young love she feels. In a moment that reminds us of the current reality in Korea, at the end when “Give Love” appears, a yellow ribbon is incorporated onto the screen, showing respect for the recent tragedy.

As for the aesthetics, the MV is very carefully composed. The color blue plays a major role; you’ll notice that the entire MV contains a blue overcast, replicating Soo-hyun’s changeable mood. Each character wears blue somewhere in their outfit in every scene, whether it is AkMu’s matching chambray shirts, the girls’ dresses, or the groom’s dapper light blue suit in Soo-hyun’s wishful dream sequence. Even the pole in the basketball court is the same color as the girl’s dress. The thematic use of color ties together what is already a very cohesive set of MVs, making the experience of watching very smooth and pleasurable.

The vivid imagery of the song supports Soo-hyun’s inner turmoil. The lyrics speak about wanting to get close to someone who “hates them,” hoping to receive love but knowing it will never come. AkMu are fond of nature metaphors, and one particularly salient example is as follows:

The love that gives and gives gets thrown away on the street, stacking up like dead leaves
When spring comes, it turns into dirt but I put my hopes up for a new sprout 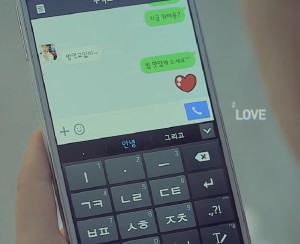 In the lyrics, AkMu tenderheartedly sing about giving love that is never received, preparing the listener for a dour MV ending. However, in a stunning surprise, Soo-hyun’s hopes bloom anew when she discovers that the pair she’s been tagging along with are brother and sister, not boyfriend and girlfriend. In a brilliant reveal and sly callback to “200%“, the MV unfolds itself like origami. In “200%” this led to the realization that Soo-hyun had merely been imagining herself dating her crush, but in “Give Love” the denouement reveals that Soo-hyun had missed signs that the pair had more of a sibling relationship all along. This surprising twist made me openly cheer for her when she ultimately realizes she actually has a chance. The visuals cast a look back on how our limited perspective on life can sometimes lead us astray from true perception, depending on what we want–or do not want–to see.

Apart from the main storyline, there is plenty of screentime for Chan-hyuk and Soo-hyun as a delightful duo. The MV begins to the opening lines of “Artificial Grass” and Chan-hyuk’s refreshingly goofy personality immediately makes a solid impression. The scenes where AkMu sit outside on the grass on a sunny day, Chan-hyuk strumming his guitar, perfectly encapsulate their playful bond as musicians and siblings. Meanwhile, the MV’s finale leaves another storyline thread open for a future return, since Chan-hyuk is possibly cultivating a crush on the boy’s sister. Double date, anyone?

The visual mathematics of this MV add up to a beautiful sum, and Akdong Musician give more than enough love to go around.