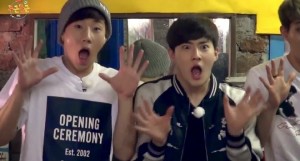 “I think today…I lost all sense of purpose”

Suho’s wise words in the third episode capture the essence of the show on a microcosmic level. In all honesty, I don’t need to write any further because that succinct line says it all but I am a literature student and would like to exhibit my talent of writing essays on a single quote.

Before I venture forth on this endeavour, I find it absolutely necessary to introduce the Indian concept of jugaad. If you are part of the post Commonwealth Games era, you would understand why jugaad is quintessential to India. Urban Dictionary defines jugaad as “The philosophy of making things on the spot to make up for a lack of prior planning”. It results in a glittery project on a rickety foundation. A house of cards which looks intriguing but collapses on even the slightest investigation.

The last two episodes are exactly such valiant saves to get the show on track and make it a bit entertaining. It’s jugaad at its finest. The Fluttering India team goes to Yash Raj Films to gather further information on the entertainment scene of India. This production house is the father, grandfather, everything of commercial Bollywood movies earning in millions every year so the team couldn’t possibly have a better guide to Bollywood. After the compulsory segment of appreciating Indian beauties with Bollywood veteran Rati Agnihotri charming Sunggyu, the boys interact with the production head of Yash Raj Films, Aashish Singh. They are told that while they are immensely talented, the key to attracting an Indian audience may lie in including elements of India in their music videos. Not that it hasn’t been done in music videos before but I am guessing he means without botching it and offending sentiments left, right and centre. Minho, Suho and Jonghyun (with black hair) get the green signal to making it to Bollywood as actors while the chutney for samosa gets the green signal to become, wait for it, curry. 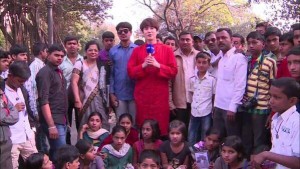 The more interesting bit of the episode, however, is their interaction with Korean stuntman Oh Seyeong. Having worked with Shahrukh Khan in the past, he gives a rundown on what to expect from India and how Koreans can navigate their way through it. According to him, we are a colourful and a friendly bunch, and he advises the group to retain their “Korean-ness”, an important point I’ll return to later. Going with popular opinion, he too thinks that the chances of K-pop infiltrating the Indian entertainment scene is little to zero.

A short glimpse to Attack of the Pin-up Boys gives me a strong “Kukkad” flashback and I feel compelled to concede to the fact that the last dance sequence did look quite Bollywood. One of the female instructors mentions that she might be the first Asian woman Mumbaikars have ever seen and I am just wondering: which continent do I belong and does she have any idea of our love-hate relationship with China?

Their conversation with Oh Seyeong in Film City, an entirely state funded monstrosity, is interrupted by a meeting with the State Minister of Culture and Tourism. Now the trip to Yash Raj studio and the talk with Oh Seyeong was a sort of build up to what I assumed a grand climax facilitated by a government representative but this instead proved to be a heavy dampener because the boys became immensely awkward. The representative, along with her squad, was more than eager to help them out even promising to assist them with a performance in Film City. One of them mentioned the North-East of India as a potential K-pop market but as expected, all the eagerness only managed to elicit unsure nods. “You wasted a great opportunity” was all I could think of because the state was willing to fund their imperialism. They could have set up the show on our money but then I remembered that spreading or encouraging K-pop in India was never the purpose of the show. It was learning how to make a goddamn news report. 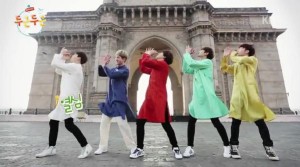 Which is what episode four was all about. After having filmed the opening of the show in Film City the day before, they move on to filming the news report on their last day in Mumbai, eager to get the 9 o’clock slot. Sunggyu pretty much dominates the show with his hilarious antics, be his overacting throughout the filming of the report or his difficult relationship with pigeons, left even more difficult due to Kyuhyun’s art of ‘dulgi’ seduction.

Unfortunately, their news report does not get a pass and is instead scheduled to air as part of the morning news segment. Captain sheds a few tears of regret but the rest are more sad about the Captain being sad than the change of slots. However that soon changes when they realize that only Minho and Kyuhyun have made the cut in the final report. So much for bridging the gap between Suho and Minho. Huh.

The show comes to an end officially but the group meets up a month later with Changmin to discuss their experiences while having Chinese food. Suho notices the discrepancy but is as usual shut down by the din caused by the group. They are given fan letters and a collage of fan appreciation videos from all over the country but hey, K-pop doesn’t exist in India. Their next stop is maybe Venezuela. I offer my deepest condolences. Fortune spins her wheel of luck in unfair ways, I understand. 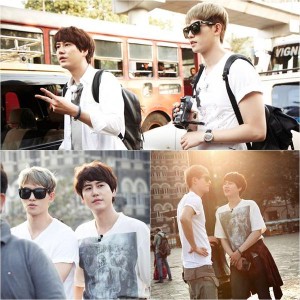 Coming back to Oh Seyeong’s advice of retaining their “Korean-ness”, I cannot help but agree with him 100%. K-pop in foreign countries does not thrive as the main source of entertainment but as a niche market. Entering mainstream Bollywood through movies may establish you as a talented Korean actor but it is by no means a way of popularizing K-pop. K-pop works because it is different. What they should be worried about is not changing K-pop but engaging with unique marketing styles. It is an industry which creates male idols specifically for a female audience. Women are considered as a legit market and not as those who are not men, and that focus could work wonders in India where actors don’t explicitly cater to the female audience.

I am surprised they did not visit even a single music director or a recording studio to get an idea of which K-pop songs will suit Indian tastes and which most definitely won’t. They could have performed at Film City and increased their chances of at least making it to the local newspaper. They could have done a lovely Coke Studio collaboration with Indian music directors. Suho could have studied the charm of Raj and rugby in Dilwale Dulhaniya Le Jayenge over experimenting with base-football. They could have done a lot of things but none of it, you see, contributes to the making of an inconsequential news report.

The show could have been about exploring a different culture, a sociological experiment on why K-pop works or doesn’t work in India, a collaboration with Indian artists, a travel show with a glutinous Minho and Jonghyun gorging on anything that is edible. It could have been anything but a news report. There was never anything interesting about people stating the obvious in a serious voice and calling it news. To expect your fans to watch television, that too is a morning news report is insensitive and extremely cruel.

The few things that I am going to miss about the show? Thighs, almost naked Jonghyun, Kyuhyun’s snoring and the Suho-Minho bromance. Apart from that, I am glad that the show is over.