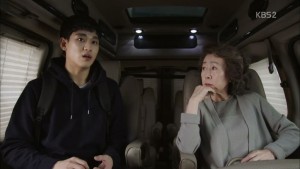 When a show messes up, people flock to their keyboards to attack the boogeyman of Korean television: the producer. These faceless and nameless employees are the perfect target for public outrage because no one knows exactly who they are. The Producers reveals what it’s like behind-the-scenes at KBS and humanizes the people to whom we are so quick to play judge, jury and executioner.

At the bottom of the ladder is rookie PD Baek Seung-chan (Kim Soo-hyun, My Love From Another Star). After chasing his long-time crush into KBS, he’s devastated that she barely remembers him, let alone likes him. He ends up on the team for One Night, Two Days led by producer Ra Joon-mo (Cha Tae-hyun, My Sassy Girl, Speedy Scandal). The show is in the middle of a crisis and on the verge of getting canceled. Meanwhile, Music Bank PD Tak Ye-jin (Gong Hyo-jin, It’s OK, That’s Love) is desperate to save face in front of her junior colleagues. Her power and influence is tested by top singer Cindy (IU, Dream High) whose cool demeanor hides her insecurities and pain. The four leads are joined by a host of quirky supportive characters as well as several unexpected cameos. 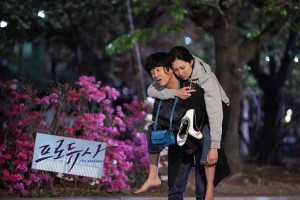 It’s refreshing to see a company poke fun at itself and the industry in general. The drama shows the completely cutthroat side to television. A lot of what we see in The Producers is the power play between seniors and juniors. Rather than an idealistic portrayal of hoobaes being completely subservient to their sunbaes, it shows what I can only guess is a more accurate picture. The people at the very top of KBS, like the CEO, are definitely put on a pedestal. People will say whatever is necessary to make him happy, even if it’s a downright lie. And like producer Kim Hong-soon (Kim Jong-kook) finds out, no amount of sucking up is enough to make the boss forgive you for even a tiny mistake. There’s no such thing as friendship in front of your boss, and even PD Joon-mo is thrown under the bus several times by his coworkers so that they can save face. 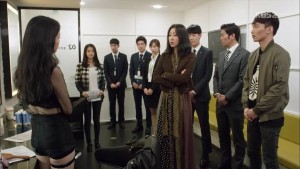 Frustrated by their treatment, the producers will often take out their anger on their juniors in an attempt to re-assert their authority. PD Joon-mo and PD Ye-jin both target Seung-chan because like a “good hoobae” he takes responsibility for everything, even if it’s not his fault. PD Joon-mo, for example, sets him up to fail by having him fire the senior actress from the show, knowing that he could blame the intern when he inevitably crashes and burns. But at the same time both are put in awkward positions that once again make them feel powerless: The rookie has good ideas that just may save One Night, Two Days and PD Joon-mo’s job, and after scratching his father’s imported car, PD Ye-jin owes Seung-chan a lot of money that she doesn’t have. This odd relationship shows how difficult it is to reconcile old ways of business, where the boss had absolute authority, and new ways, where people want credit for individual effort. 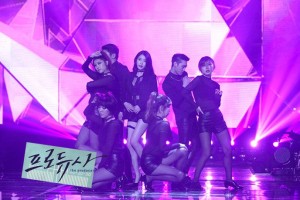 A lot of PD Ye-jin’s stress comes from the fact that she feels she needs to be perfect and in control all of the time; she can’t show any weakness in front of her subordinates or she might lose their respect. She has a standoff with Cindy over wearing a jacket on stage, explaining that her outfit is too revealing for KBS. But when Cindy defies her, the issue becomes less about a leather jacket and more about saving face in front of the new interns. The drama expands to show the power plays between producers, writers, singers, actors, comedians, and entertainment CEOs. All of them are trying to outsmart and outdo each other in a race to the top.

Although by episode three the drama hit its stride, it did have a rocky start. The Producers was originally marketed as a documentary-style drama like US shows The Office or Parks and Recreation. The first episode was the first time I’ve seen a Korean drama try its hand at dry, awkward humor. People were either confused or just bored. Dry humor can be difficult to understand at first, especially since it depends so much on the characters, comedic timing and editing. It can be really funny, but unfortunately the creators were afraid to commit to it fully. What ended up happening in episode one was an odd mix of documentary style and traditional filming techniques. Background music was added and then taken away, flashbacks were put between individual interviews, and there weren’t enough close-up shots to enhance the dry humor. 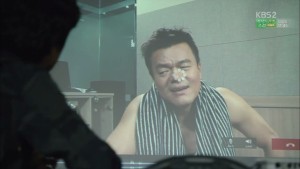 By episode three, the drama went in a different direction. It’s still funny, but it has dropped most of the documentary façade. To make the dry humor more recognizable, the drama uses background music and sound effects to signal to the audience, “pay attention, this is funny.” But even though it’s different now, it is still a nice change from the slapstick style humor you usually see. One of the funniest scenes is when PD Joon-mo is trying to talk via webcam with JYP, but the signal keeps getting lost, treating us to a series of weird frozen facial expressions. There’s no attempt at an over-the-top reaction; PD Joon-mo has to suffer quietly in all of the awkward, uncomfortable glory.

Part of the humor also comes from how the show weaves together the real KBS and actual stars. KBS shows are always playing in the background, and celebrities casually walk by. One of my favorite shows, Hello Counselor, is even featured, and a lot of the humor comes from knowing how the show works. And then there are the tons of unexpected cameos, from EXID’s Hani who goes to jail for beating up a group of drunks to Got7’s Jackson who sings his praises for the godlike JYP. It’s good to see celebrities play an extreme version of themselves and poke fun at the industry. 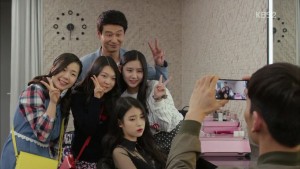 Although I enjoy most of the characters, IU’s acting sticks out because it was a pleasant surprise for me. This is the first drama I’ve seen with her, and based on past experiences, I wasn’t expecting much from an idol. But her interpretation of a diva singer is pretty unique. Rather than the loud, obnoxious and bossy image we’re used to seeing, Cindy is quiet and just beyond annoyed to even bother caring. Her lack of emotion is just hilarious to watch, especially in scenes like the first episode where fans are so eager to steal a selfie with her. Rather than the constantly peppy and smiling robots we’re used to seeing, Cindy is just worn out and tired. Through her we can see hints of the ugly side of K-pop: adolescent trainees who are put on extreme diets, resentful group members who are left behind when one goes solo, netizens setting up hateful anti-fan cafés. She’s so accustomed to being used that apathy is her only emotional defense. I’m looking forward to seeing her change and open up.

Overall, The Producers is a nice break from the typical drama formula. Although it had a few stumbles in the beginning, the show seems to have reconciled the dry humor it wanted to use with the expectations of the audience. The unpredictable nature of the show makes it that much more enjoyable, and it will be fun to see who else pops up in the next episodes!